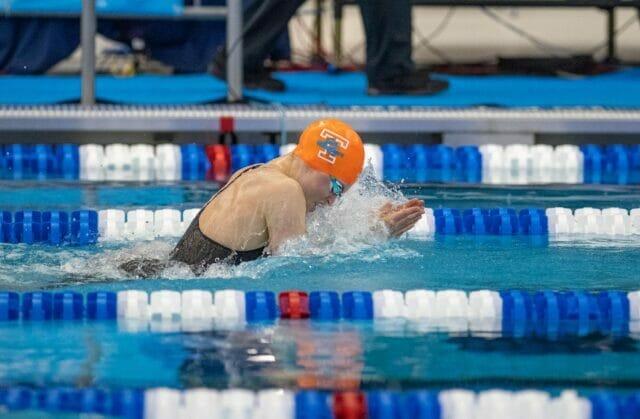 Kentucky hosted SEC rival Tennessee on Friday night at the Lancaster Aquatic Center in Lexington. The Lady Vols downed the defending SEC champion Wildcats by 23 points, while the men’s meet wasn’t nearly as close, featuring a Tennessee victory by 84 points.

Tennessee sophomore Mona McSharry continues to assert herself as one of the premier women’s breaststrokers in the NCAA. The Irish Olympian swept the women’s breast events on Friday, clocking a blistering-fast dual meet 100 breast of 59.68. She was over a second faster than anyone else in the field on both 50s of the race, taking it out in 28.28, and coming home in 31.40. She then went on to clock a 2:09.99 in the 200 breast, which is also a fast dual meet performance. Between her breaststroke races, McSharry also clocked a 22.99 50 free, which was good for 4th.

LEXINGTON, Ky. – It was a hard-fought battle between two Southeastern Conference rivals, but the RV/No. 12 University of Kentucky men’s and women’s swimming and diving team fell to No. 17/7 Tennessee on Friday afternoon at the Lancaster Aquatic Center. The UK men’s team dropped a 192-108 decision to the Vols while the Wildcat women were bested by the Lady Vols, 161.5-138.5.

Kyndal Knight swept both boards for Kentucky, posting final scores of 290.18 on the 1-meter and 333.60 on the 3-meter. Morgan Southall finished second on the 3-meter with a personal best of 327.75, and Abby Devereaux achieved her Zone cut on the 1-meter 272.85 for a lifetime best of her own.

The Wildcats have two weeks off from competition to prepare for the Ohio State Invitational from Nov. 18-20. Hosted by the Buckeyes, the three-day meet will take place at the McCorkle Aquatic Pavilion in Columbus, Ohio.

LEXINGTON, Ky. – Tennessee swimming & diving had a pair of strong showings Friday, sweeping the Kentucky Wildcats on the road at Lancaster Aquatic Center.

The Lady Vols earned their second-straight top-15 win with a 161.5-138.5 victory against 12th-ranked Kentucky, who is the reigning SEC champion, while the Vols cruised to a 192-108 win against the Wildcats. Tennessee posted three meet records on the day.

The Lady Vols went back and forth with Kentucky early on in the meet. After Summer Smith secured the top time in the 1000 free with a mark of 9:56.94, Tennessee rallied with a strong showing in the 50 free to extend its lead going into the first break. Jasmine Rumley touched the wall first at 22.76 to pace three scorers for the Lady Vols in the event. Trude Rothrock finished in a tie for first in the 100 free (49.83) after placing second in the 200 (1:48.21). Julia Mrozinski came out on top in the 500 with a time of 4:50.47.

With the meet tight going into both butterfly races, Tennessee received a huge swing in momentum with a sweep in the 200 fly early followed by a strong performance in the 100 as Trude Rothrock (53.36) and Mallory Beil (53.74) took first and second, respectively. Beil placed third in the 200 behind the freshman duo of Ellen Walshe (1:57.26) and Sara Stotler (1:58.40).

“Kentucky is a really competitive program, so it’s great to race against them in November,” associate head coach Ashley Jahn said. “They showed us again just how competitive they are, but we came out as the victors. It was fun to see us win and show off our depth in different areas against a really good team.”

The Vols dominated the meet, posting the top times in 12 of 14 events and recording four sweeps. Two of the sweeps came in the breaststroke races. In the 100, Michael Houlie took first (53.67) followed in second by Lyubomir Epitropov (53.95). The duo swapped places for the 200, as Epitropov posted the top time of 1:57.41 ahead of Houlie’s 1:59.93. Jarel Dillard and Brett Champlin finished third and fourth in both races, respectively.

“We continue to lean on our breaststrokers, as they present really well in these meets,” associate head coach Rich Murphy said. “Those guys are really competitive with each other and keep challenging each other to raise the level. We are really benefiting from their competitive presence. Our relays continue to be very competitive. We want all the men on the team to feel like they are behind the blocks when the 400 free relay goes off, so regardless of how the meet is shaping up, we want to see it out all the way until the end. We know that it comes down to the 400 relays in our best, most competitive and most fun dual meets. With NCAAs and SECs also ending on the 400 free relay, it’s a great championship mindset rehearsal for us.

“We have gotten a lot of consistency from Rafael in the longer races and Harrison in the backstrokes. We continue to benefit from Kayky’s presence in the butterflies. I’m really excited about what our sprint crew is showing both in the 50 and the 100. Jordan has been outstanding, and Scott is from Lexington, so it’s always fun to watch him do well here. Across the board, it was a really good, solid team effort.”

Tennessee opened the meet with a strong showing in the 200 medley relays, posting the top times for both races. The Vols took first and second in the event as the squad of Lierz, Houlie, Mota and Scanlon recorded a time of 1:26.92, and the team of Griffin Hadley, Dillard, Luke Brice and Micah Chambers touched the wall in 1:28.92. The Lady Vols lineup of Josephine Fuller, McSharry, Emma Carlton and Rumley notched the top mark of 1:38.60.

Rothrock, Rumley, Mrozinski and Tjasa Pintar picked up the win in the 400 freestyle relay (3:20.24), while the men took first and second in the event. Crooks, Chambers, Jackson and Bailey posted the top time of 2:57.70, while Briggs, Houlie, Ponce de Leon and Scanlon recorded a mark of 2:59.30.

“I’m relatively happy, even though I don’t like to get beaten,” diving coach Dave Parrington said. “First of all, credit to Kentucky’s divers. They are a very strong team to begin with, but they also dove very well today. That is what you expect in a great rivalry. We had some divers that really battled. Grace had a solid 3-meter, and then she came back and was on the edge of winning the 1-meter against a former SEC champion. I think that will be a confidence boost for her. On the men’s side, Bryden was solid. It was a good learning experience for us in a hostile and loud environment. We have a lot to learn from today, and we will go back and keep working at it.”

Up next, UT will host some of the nation’s top teams for the annual Tennessee Invitational on Nov. 18-20 at Allan Jones Intercollegiate Aquatic Center. Among the teams slated to compete, three squads are ranked on both the men’s and women’s side. The teams coming to the invitational will be Virginia (#1 women/#9 men), Alabama (#14/#20), Arkansas, South Carolina, UNLV and Carson-Newman.

“We are hungry and eager heading into the invite,” Murphy said. “We know our best swims are still ahead of us this season, so it will be exciting to get a little bit of rest and then compete in that championship format. That is always a fun time, and it’s always an honor to host both the invite and SECs like we are this year.”