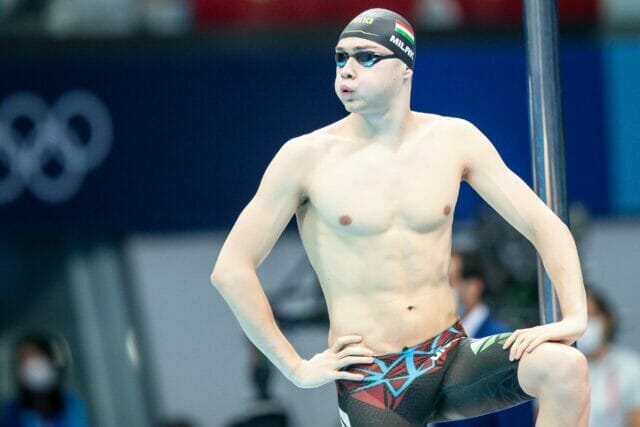 Host nation swimmer Kristof Milak dove in twice during this morning’s heats of this FINA World Cup Series stop in Budapest, however, neither race was his signature 200m fly event.

First, in the 50m back, Milak clocked a speedy morning outing of 23.34 to represent just one of two swimmers to get under the 24-second threshold. Joining him was Aussie Zac Incerti, posting a time of 23.96.

For Milak, his AM result already takes over his previous personal best in the event, a mark which stood at the 23.49 he produced 3 years ago. In fact, his swim today renders him the new Hungarian national record holder, surpassing the previous national standard of 23.39 Richard Bohus put up in 2019.

Leading the pack was Aussie dynamo Kyle Chalmers, with the 23-year-old hitting 46.80 as the only sub-47 second swimmer. Flanking the Marion swimmer tonight will be Jesse Puts of the Netherlands and Russian Vlad Morozov, with the former hitting 47.13 to the latter’s 47.41.

Last week in Berlin, Chalmers and Puts finished 1-2, with American Blake Pieroni rounding out the top 3. Pieroni has a chance to land on the podium once again as well, notching the 4th seed in 47.44.

Madi Wilson continues her COVID-19 return to wellness with a top seed in the 200m free. She topped the women’s field in 1:55.09, well on her way to another 1:54.00-caliber performance, which is what she logged in Berlin last week for gold.

Aussie teammate Emma McKeon was also in action, landing lane 4 in the 50m fly in a time of 25.72 while last week’s winner, Holly Barratt, was right there in 25.84.

On-fire South African teenager Matt Sates notched a World Junior Record of 1:51.45 last week en route to beating a strong men’s 200m IM field and he’ll try to drop even more time here in Budapest. He made sure he secured the pole position in a time of 1:58.15, leading Yakov Toumarkin of Israel (1:58.37) and Danas Rapsys of Lithuania (1:58.54) for tonight’s main event.