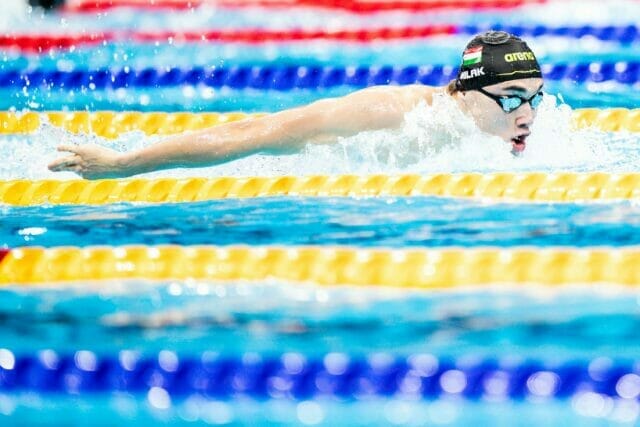 The Hungarian Swimming Association released a relatively small roster for the upcoming Short Course European Swimming Championships which will take place in Kazan, Russia from November 2 – 7, 2021. While all-stars Katinka Hosszu and Boglarka Kapas are among those not included on the roster, the nation will still send some heavy hitters including Kristof Milak and Szebasztián Szabó.

Check out the full roster and press release here.

Hungary’s most dominant swimmer right now is butterfly prodigy Kristof Milak who stunned the world back in 2019 when he broke a Phelps world record in the long course 200 butterfly. Milak won gold in the event at the 2019 World Championships in a 1:50.73 to become the fastest man in history. Milak followed that up 2 years later with an Olympic gold medal-winning swim at Tokyo 2020 when he hit a 1:51.25 Olympic record, along with a silver in the 100 fly.

Milak recently got a chance to show off his short course power and versatility at the Budapest stop of the 2021 FINA World Cup where he won the 50 backstroke, silver in the 100 butterfly, and bronze in the 100 and 200 freestyles.

On the women’s side, Ajna Késely and Zsuzsanna Jakabos will lead the way into the meet. Both women won medals for Hungary at the most recent short course Euros back in 2019 with Késely taking 400 free bronze and 800 free silver while Jakabos earned 200 fly bronze and 400 IM silver.

Katinka Hosszu‘s absence from the Hungarian Euros squad is not all that surprising considering that she hasn’t raced since the Tokyo 2020 Olympics. Hosszu was absent from the International Swimming League regular season in which her team, Iron, finished 7th overall. Team Iron competed in the 11th play-in match against Tokyo, DC, and New York and wound up securing a spot in the play-offs which take place in November. Hosszu has also been absent from the FINA World Cup this year, the first three stops of which took place in Berlin, Budapest, and Doha. She is not expected to race at the final stop in Kazan either.

Hosszu was the star of the meet at the last iteration of the Short Course European Championships back in 2019 when she won quadruple gold in the 200 butterfly and all 3 IM events.

Just as Hosszu has been, Boglarka Kapas has been fairly quiet since competing in Tokyo. Kapas was retained by the New York Breakers this year during the inaugural ISL draft but didn’t race during the regular season and won’t have an opportunity to as the New York Breakers were eliminated during Match 11. Two significant absences on the men’s side are Olympic finalists Adam Telegdy and David Verrasztó.