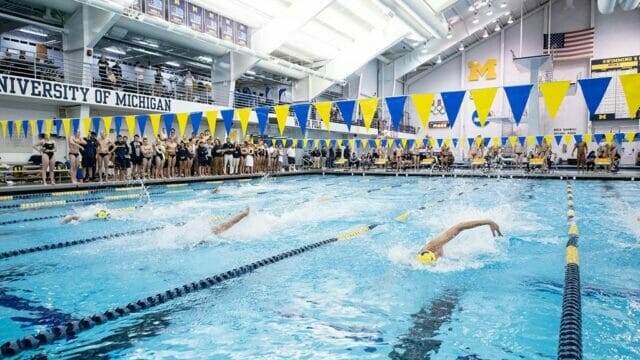 Despite the University of Michigan sending 18 of its best athletes–9 men and 9 women–to the SMU Classic, the Wolverines still comfortably defeated in-state mid-major neighbors Oakland University in their duel Saturday.

Michigan’s Bence Szabados dominated the men’s 100 butterfly, posting a 47.99 to get the win by nearly 3 seconds and come within a second of his 2021 lifetime best of 47.34 from the Big Ten Championships. Wolverine teammates Andrew Trepanier and Charlie Morici also recorded times under 49 seconds, posting a 48.61 and a 48.98, respectively, though both swam the 100 fly exhibition. Szabados also placed 2nd in the 200 fly in 1:50.97, led off the 400 freestyle relay in 44.49, just over a second off his lifetime best, and contributed a 19.43 freestyle split to Michigan’s ‘B’ medley relay team which tied for 1st with the ‘A’ team.

James LeBuke claimed the men’s 100 and 200 freestyles for the Wolverines, stopping the clock in 45.09 and 1:39.26, respectively. The 200 was a strong swim for LeBuke and comes within 1.5 seconds of his personal best set at the 2021 Big Ten Championships.

AJ Bornstein dominated the men’s 200 breaststroke, winning by 4 seconds in 2:01.05. The unofficial runner-up, Jack McCurdy, swam exhibition, as did 3 other Michigan men, meaning the points for 2nd through 4th in the men’s 200 breast all went to Oakland swimmers.