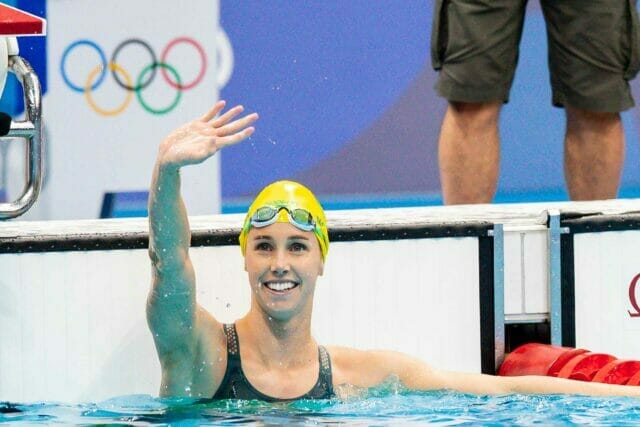 We’re now on the final day of the final stop of the 2021 FINA World Cup Series with this competition here in Kazan set to conclude with tonight’s session.

We already saw a World Record bite the dust yesterday, courtesy of Aussie Kyle Chalmers in the men’s 100m free, and although that type of special swim is extremely difficult to replicate, there are still several key races to watch this evening that can bring the heat.

Setting herself up with double top seeds from this morning was Aussie Emma McKeon, with the 27-year-old firing off a time of 57.35 in the 100m fly followed by 51.94 in the 100m freestyle to land lane 4 for both.

In the latter, McKeon was especially in a league of her own, with the next closest swimmer represented by teammate and 200m free winner from yesterday Madi Wilson who was over a second behind this morning in 53.03.

McKeon already set the World Cup record at 50.58 to tie Sweden’s Sarah Sjostrom earlier in the series, so we’ll see if she can outright own the 1free WC Record mark in tonight’s final.

Swiss ace Maria Ugolkova was another multi-event swimmer, with the 32-year-old racing the 100m fly and 200m IM. She will flank McKeon this evening in the former, producing a time of 57.73 as the 2nd seed, while she is in the pole position in the latter in a morning mark of 2:08.80.

The men saw a dominant morning performance from Russia’s Kliment Kolesnikov, with the versatile 21-year-old logging a 100m back outing of 50.09. Splitting 24.42/25.67, Kolesnikov is on the road to hitting a sub-50 time tonight, with the Chinese swimmer Xu Jiayu’s World Cup Record of 48.88 from 2018 in his sights.

Chalmers focused on the 50m fly and is not swimming the 200m free, which means South Africa’s 18-year-old Matt Sates is the sole man to beat in tonight’s final. He took the 2free top seed in 1:43.06 and will try to add another gold to his successful World Cup campaign.

That is if Lithuanian Danas Rapsys and Brazilian Fernando Scheffer don’t spoil the teen’s plans.

Fellow teen sensation David Popovici of Romania is also in the mix as the 4th seed in 1:44.13, with his morning result already checking in as the new Romanian national record. We’ll see what kind speed Popovici has in store, following up on his near-one-second time drop in his 100m free lifetime best yesterday between just prelims and finals.

Daiya Seto of Japan is another high-profile man to watch this evening, with the 27-year-old world record holder taking on the double of the 200m breast and 400m IM.