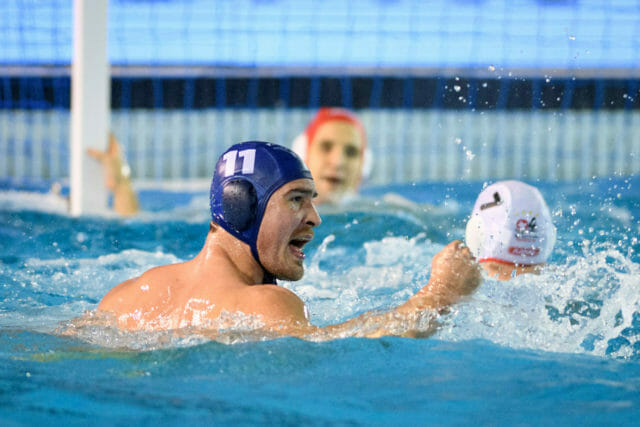 Marseille caused the upset of Day 2 by crashing Jug in Dubrovnik. Title-holder Recco didn’t have any headaches while manhandling Steaua and in the battle of the qualifiers OSC came up with a convincing performance in Belgrade to claim its second win. The German derby was the most thrilling clash, Spandau, leading by three before the last period, needed a last-grasp goal to save the match against Hannover to a draw.

Marseille stunned Jug with a 0-4 rush at the beginning and even though the Croats managed to recover from that and levelled the score at 6-6 early in the third, the next assault from the French was too much to handle. The rebuilding process needs some cooler heads on the Croatians’ side as they let the ball fly from all corners of the pool, took 35 shots but could score only 9 while Marseille netted 14, out of 25 attempts.

Title-holder Recco enjoyed an easy-cruise against Steaua at home, set a new scoring record for this season by 23 hits (Olympiacos netted 20 against Dinamo on Day 1), Hungarian leftie Gergo Zalanki contributed 7 goals from 7 shots. After two rounds, besides the Italians, only OSC could keep its perfect record. The Magyars showed some quality at both ends of the pool in Belgrade while downing Crvena Zvezda – a jump from 3-4 to 3-8 and an almost 12-minute shutout founded their valuable away victory.

The German derby produced the most balanced match – for three periods Spandau dominated and gained an 8-5 lead. However, in the fourth, the home defence collapsed and at 9-10 Hannover sat in the driving seat. At 10-11 the visitors missed a match-ball (a man-up), while Nikola Dedovic converted the hosts’ last chance two seconds from time.

Jug v Marseille 9-14 – Jug arrived at the game a bit lately, at least mentally. They needed more than nine minutes to get on the scoreboard, by then Marseille was already 0-4 up. The French scored from a man-up early, then killed two man-downs and added back-to-back action goals in 47 seconds towards the end of the first quarter, then their Croat Ante Vukicevic kicked off the second with another fine action goal. Though Loren Fatovic opened Jug’s account but Vukicevic replied immediately from a 6 on 5 for 1-5 and it still stood 2-6 with 4:24 to go till the break. The hosts started to feel the rhythm, managed to hit two in a minute but later they missed two man-ups so it was 4-6 at halftime.

Jug came back strong for the third and Fatovic levelled the score in 41 seconds with a great action goal and from a counter. But however hard they worked for this 6-6, soon the Croats lost their momentum as leftie Ugo Crousillat put two man-ups away in succession while Jug fell back in offence once more. Soon Romain Marion finished off a counter for 6-9 and Jug had to restart the chasing game. They needed 35 seconds to jump back to 8-9 but then they missed crucial 6 on 5 while Marseille put away another one and converted a penalty to regain its three-goal lead before the last break. It was decisive who hits the first in the fourth – and this time Fatovic couldn’t help. After his missed shot Crousillat finished off the ensuing counter for 8-12 – and for Jug that proved to be the killed blow. Another 6 on 5 gone without a shot and Thomas Vernoux’s nice centre-action put the game in bed even though it was still 4:23 to go. The Croats lacked precision in front, even though they outshot the French 35-25 but the shots on target were 20-20 and the number of saves (6-11) is also telling, not to mention the man-ups: 2 for 12 versus 5 for 8, a real difference.

Zvezda v OSC 8-11 – It was 3:32 to play in the fourth and OSC led 7-11 – a day ago Radnicki was in this same, seemingly hopeless situation against Ferencvaros, then the Serbs made a miracle to come back to 11-11. The second Serbian-Hungarian derby did not reproduce the same scenario, though.

Indeed, OSC was clearly the better side right from the beginning, they opened the encounter with a 0-2 period, showing some tremendous defending. The hosts needed 9:07 minutes to score their first, then started to find the back of the net, converting extras, but the Magyars were up to the task too. They had some ups and downs, missed a 6 on 4 but after conceding three in the first four minutes of this quarter, they tightened their defence again and shut out the Serbs for the following 11:27 minutes. And they used this period to build a massive 3-8 lead from some finely tuned 6 on 5s and Balazs Harai also delivered his trademark centre-goals. Veljko Tankosic netted an extra to halt the bad run of the home side but they were still trailing by four before the last break.

Again, Zvezda managed to find the right finishes in the fourth – altogether, they scored four goals, as many as in the first three periods but OSC also kept its composure and twice regained the five-goal lead, only to let two go in the last three and a half minutes. Still, Zvezda didn’t have any realistic chance to stage a Radnicki-like comeback. OSC’s goalie Marton Levai was the one of the keys in the Magyar’s win as he posted 14 saves on 22 shots for a 63.5% percentage.

Spandau v Hannover 11-11 – The German derby offered great thrills for four periods – for most of the time Spandau was in front but at the end the Berliners had to dig deep to save the game to a draw.

Spandau took a 4-2 lead deep into the second, but their home arch-rivals came back to even in 51sec while shutting out the hosts for 5:39 minutes in this period.

Dmitri Kholod’s two fine shots from man-ups put Spandau ahead once more and even though fellow Russian Ivan Nagaev pulled one back at the other end, Mateo Cuk’s double in a span of 40 seconds gave an 8-5 lead for the home side before the last break.

However, Hannover wasn’t done, they opened the last period with two action goals from as many possessions. Kholod sent the ball home from another man-up but Hannover came up with two more action goals, this time in 43 seconds and it was all even at 9-9 with 4:11 to go. And after a killed mandown, Nagaev put Hannover ahead for the first time after 0-1. Nikola Dedovic netted a 6 on 4 for 10-10, but Jan Winkelhorst also buried a man-up for 10-11 with 1:25 from time. Soon Hannover had a golden chance to secure the three points, but they missed their last 6 on 5 and that cost them two – Spandau also earned a man-up 14 seconds before the end and Dedovic found the back of the net 2 seconds before the buzzer.

Recco v Steaua 23-5 – The two sides belong to different categories – and the difference is not just one level between them. Recco basically did whatever it wished to, the Romanians tried to put up some resistance but the titleholding Italian side was way too superior in all aspects of the game. Steaua’s lonely brighter spell came at 6-1 when they netted two for 6-3 – but Recco hit back with an 8-0 run.

Recco didn’t need a man-up in the entire third period, still scored seven goals. Newly signed Magyar leftie Gergo Zalanki enjoyed an exceptional evening as he went 7/7, a great feat even in a game like this. Romanian national team goalie Marius-Florin Tic won’t keep this match among his most treasured memories as he faced 27 shots and could put a hand on only 4 – his teammates could target only 14 to Recco’s goal and Marco del Luongo stopped 9 of those.