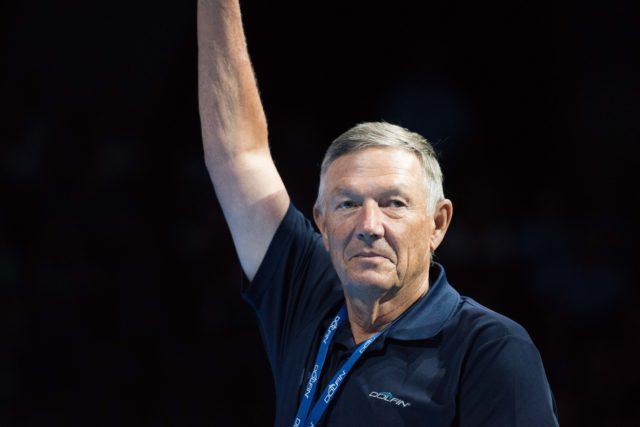 Mark Schubert stepped down as head coach of the Mission Viejo Nadadores on Tuesday, two months earlier than anticipated. A month ago, he announced his retirement but said he expected to stay on until the end of the year while the MVN board conducted a search for his replacement.

“Tuesday was my last day. It was pretty emotional. Everybody was pretty upset but it’s smoothing out now,” he said.

Schubert was first hired to coach at Mission Viejo as a 24-year-old in 1972 when the club consisted of 55 swimmers. Over the next 13 years, he built the Nadadores into a powerhouse with over 500 athletes, earning 44 national team titles and attracting talent from around the world. During that era, he coached Olympians Shirley Babashoff, Brian Goodell, Mike O’Brien, Sippy Woodhead, and Dara Torres, among others, and earned multiple ASCA Coach of the Year awards.

After a three-year stint as head coach of the Mission Bay Makos Swim Team in Florida, he took the helm of the University of Texas women’s team and won a pair of NCAA team titles in 1990 and 1991. He then took over as head coach at the University of Southern California, leading the women of Troy to their first-ever national title in 1997.

Schubert was U.S. National Team Director from 2006 until 2010 and served on eight consecutive U.S. Olympic team staffs, from 1980 (although the United States ultimately boycotted those Games) until 2008. Among the Olympians Schubert coached over the years were Brad Bridgewater, Janet Evans, Lindsay Benko, Lenny Krayzelburg, Klete Keller, Erik Vendt, Jessica Hardy, Larsen Jensen, Ous Mellouli, and Kaitlin Sandeno to the Games.

Schubert went on to become the CEO and head coach at Golden West Swim Club in Southern California before coming back to Mission Viejo in 2016 after longtime coach Bill Rose retired. At this summer’s 2020 Tokyo Olympic Games, Michael Brinegar, Zach Apple, Haley Anderson, and Annie Lazor, all represented Mission Viejo.

Kris Yellin of the MVN Foundation told SwimSwam that former Nadadores swimmer Logan Redondo is taking over as interim coach while the board continues to interview a replacement for Schubert. “Logan Redondo will be the interim coach for the high performance group while we continue our search for a replacement head coach. The group is in good hands with Logan and he is dedicated to see the group through to success as long as need be.”

Redondo will be in charge of a group that trains current National Junior Team members Justina Kozan and Katie Crom. Five members of the U.S. National Team compete for MVN (Anderson, Apple, Brinegar, Lazor and David Heron) but not all of them train there.

Schubert told SwimSwam that he wanted to spend more time with his wife. He also took advantage of a free afternoon on Wednesday to watch his 14-year-old grandson play water polo for Newport Harbor High School.