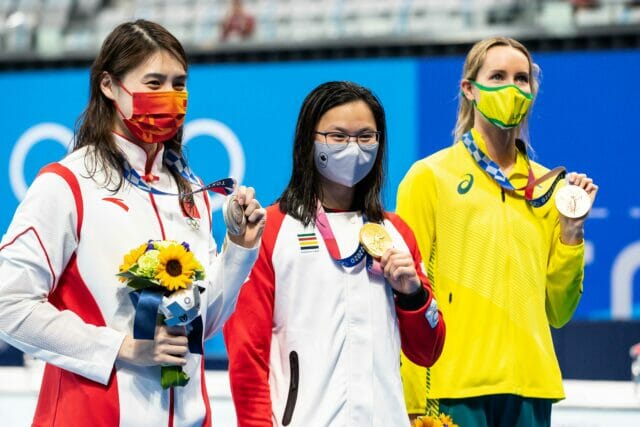 By Ben Dornan on SwimSwam

The Association of National Olympic Committees held their Tokyo 2020 award ceremony over the weekend to honour some of the top athletes who competed at the Olympics. The committee gave out 9 main awards including the Best Female Athlete of Tokyo award, which went to Canadian swimmer Maggie MacNeil.

In addition to gold in the 100 butterfly, MacNeil helped her fellow Canadians to a silver medal in the 4×100 freestyle relay along with a bronze in the 4×100 medley. She, Kayla Sanchez, Rebecca Smith, and Penny Oleksiak hit a 3:32.78 in the freestyle relay to trail the world record-breaking Australians by just over 3 seconds.

MacNeil was one of three Canadian women to win three medals at the Tokyo Games. Fellow medley relay medalists Penny Oleksiak and Kylie Masse also stood on three podiums as Oleksiak took 200 freestyle silver and 4×100 freestyle bronze while Masse earned silver in both the 100 and 200 backstrokes.

MacNeil was honored at the ANOC ceremony in Greece alongside her fellow award winners including Eliud Kipchoge, the Kenyan runner who won gold in the marathon in Tokyo.