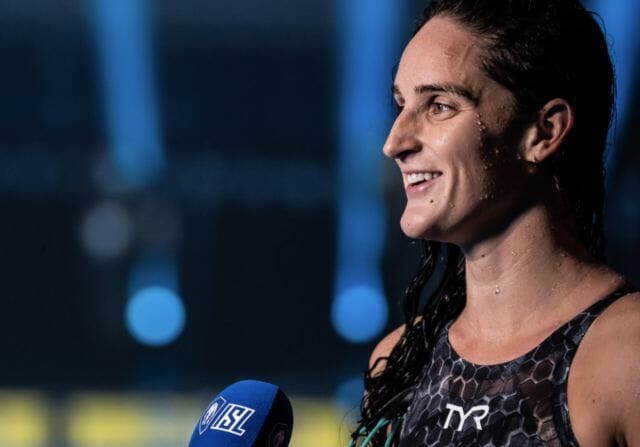 2016 U.S. Olympian Leah Smith has moved to train with Carol Capitani and Mitch Dalton at the University of Texas, she confirmed to SwimSwam on Tuesday.

“I moved to Austin in August and I am training with Carol and Mitch and the women’s team at Texas,” Smith said. “It’s been so fun getting to know a whole new team and coaches. The girls have been so welcoming and awesome to train with.

“I’ve always had a lot of respect and admiration for both Carol and Mitch and so I’m very excited for my journey with them, and to cheer on Texas this year!”

Smith said that she was grateful for her time at Arizona. “I’m very thankful to the coaches at Arizona for everything we did over the past few years together and I’m excited for what’s next!”

Smith represented the United States in Rio at the Olympic Games, where she won gold while swimming a leg of the finals 800 free relay, plus an individual bronze medal in the 400 free. She also placed 6th individually in the 800 free.

Smith has a number of other individual international medals as well. That includes 2 golds, 2 silvers, and 2 bronzes from the long course World Championships. At the most recent World Championships, in 2019, she won silver on the 800 free relay and bronze in the 400 free.

In short course, she won gold in both the 400 and 800 frees individually at the 2016 World Short Course Championships, part of 5 total World SC medals. She also has 5 Pan Pacific and 2 World University Games medals.

In spite of a run of international success after the Rio Olympics, Smith didn’t qualify for the Tokyo 2020 Olympic team. She finished 4th in the 400 IM final, 3rd in the 400 free final, and 8th in the 200 free final. She didn’t attempt the 800 free at Trials.

Even with Virginia’s recent rise to become the top women’s program in the country, Smith still holds school and ACC conference records in the 500, 1000, and 1650 freestyles. Paige Madden, who won the 200, 500, and 1650 free at the most recent NCAA Championships, broke her record in the 200 free last season.

No Tokyo 2020 U.S. Olympic female swimmers trained at the University of Texas in the runup to the Games. Two would-be Longhorns, however, did: Lydia Jacoby, a breaststroker who won the 100 breast in Tokyo, will join the program next fall. Erica Sullivan, who took silver in the 1500 free, is a freshman this season.

Smith was signed to the Tokyo Frog Kings’ roster for the 2021 International Swimming League season, but did not make any regular season appearances. Tokyo finished 4th in the playoff “Play-In” match two weeks ago, which ended their season.