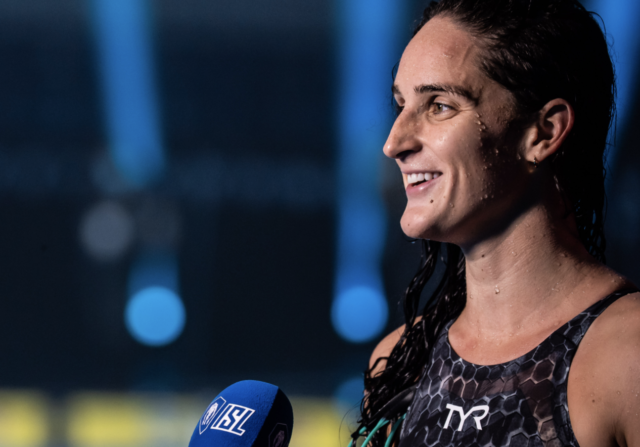 Two-time Olympic medalist Leah Smith was in action over the weekend at a Longhorn Aquatics-hosted meet in Austin, hitting a massive lifetime best in the 400 individual medley (SCY) while also putting together a strong showing in the 500 freestyle.

Smith, who moved to Austin in August to train under University of Texas women’s coaches Carol Capitani and Mitch Dalton, put up a time of 4:03.83 in the 400 IM, more than 10 seconds under her previous best time of 4:13.93. That time was set in a January 2017 dual meet against NC State when Smith was competing in the NCAA with the University of Virginia.

As a point of reference, Smith’s time would’ve placed fourth in the ‘A’ final at the 2021 Women’s NCAA Championships.

Smith has always primarily been a freestyler, including winning a 2016 Olympic gold medal in the women’s 4×200 free relay with the United States, and also claiming bronze individually in the 800 free.

However, she’s also shown flashes of brilliance in the long course 400 IM over the years, including winning the 2017 U.S. World Trials in a best time of 4:33.86 en route to placing sixth in the World Championship final later that summer.