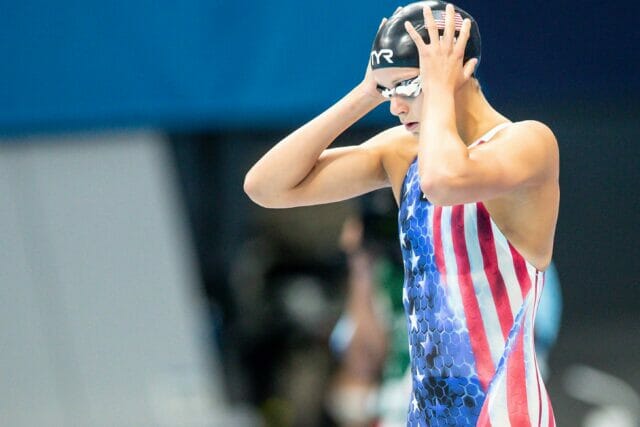 This weekend Sandpipers of Nevada will be hosting the Las Vegas Open Water Champions Cup, which will be serving as a US National Team selection race, and an opportunity for FINA Junior World Cup swimmers to make the FINA Marathon Series. The races will be held at Lake Las Vegas, and will be following the following schedule:

None of the US open water Olympians from Tokyo are entered in the races this weekend, which isn’t too surprising, given that the Olympic open water events were held just 2 months ago. However, Michael Brinegar, who represented the US in the 800 and 1500 free in Tokyo, is entered in the men’s 10K on Friday. Based on LCM 1500 times, Brinegar is the top seed, although Mission Viejo’s David Heron and University of Florida’s Brennan Gravley aren’t far behind.

The women’s Elite 10K is headlined by 15-year-old Katie Grimes, who finished 4th in the women’s 800 free at the Tokyo Olympics. Behind Grimes is Indiana University freshman Mariah Dengian, who has been swimming well for IU in her first pair of meets in the past week. Denigan has swum sub-10:00 1000 freestyles at both the IU intrasquad meet, and IU’s double dual with Kentucky and Indiana State, which were just 4 days apart. Florida’s Taylor Ault and Treasure Coast Aquatics Blair Stoneburg are also in the mix here.

Brinegar isn’t entered in the men’s Elite 5K, leaving Heron and Gravley at the top of the psych sheet. Grimes again is entered in the women’s Elite 5K, although this time fellow Sandpipers of Nevada Olympian Bella Sims is joining the race. Sims won a Silver medal as part of the United States’ women’s 4×200 free relay in Tokyo. Tennessee freshman Summer Smith is also entered in the 5K, and isn’t too far Behind Sims in the LCM 1500.