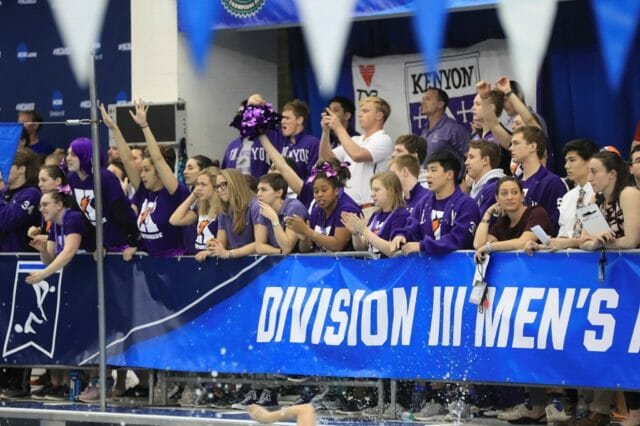 The Kenyon team drove 3o minutes south on Saturday to face off against their primary rivals Denison in a dual meet that featured the top-ranked team in DIII (Denison men, Kenyon women) on both sides.

The women’s meet featured number one ranked Kenyon squaring off against number three ranked Denison. Kenyon lived up to their ranking, running away with the meet with a final score of 192 to 108.

The Kenyon women came out firing, grabbing the top two spots in the 200 medley relay. The first-place relay, consisting of Olivia Smith, Jennah Fadely, Crile Hart, and Emmie Mirus finished in 1:44.70, while the school’s B-team finish nearly four seconds behind them in 1:48.01.

Denison came back in the next event, the 1000 free, with Alix O’Brien posting a dominant win over Kenyon’s Kira Bowling. O’Brien finished the race in 10:19.72, over 20 seconds ahead of Bowling. O’Brien also added runner-up finishes in the 200 back and 400 IM.

After starting the meet by helping her team win the medley relay, Crile Hart picked up a pair of individual event wins, grabbing first in both the 200 free and 100 fly. The 2019 NCAA champion in two events, Hart won the free in 1:53.74 before picking up the win in the fly in 55.59.

Kenyon grabbed the top two spots in the 100 breast, with Jennah Fadely and Gabby Wei taking first and second. The duo, who are both freshmen on the team,  finished in 1:04.15 and 1:06.36.  The duo also finished first and second in the 200 breast, with Fadely coming away with the win in 2:19.86 and Wei finishing just behind in 2:20.67. Fadely was the North Carolina state champion in the 100 breast in high school, while Wei was a finalist in the 200 breast at the 2020 Champions Series meet in Carlsbad.

Emmie Mirus sped to a first-place finish in the 50 free, grabbing the win in 24.15. Back in 2019, Mirus finished 4th in the event at the NCAA Championships. At that meet, she actually swam the second-fastest time of the meet, having touched in 22.97 during prelims.

The Dension women performed well on the diving boards, with Kerstyn Johnson winning on both the 1-meter and 3-meter. On the 1-meter she scored 227.03, while on the 3-meter her final score was 228.15.

Kenyon’s Sydney Geboy picked up the win in the 100 free, edging out Tara Culibrk of Denison with a time of 52.58.

Taryn Wisner secured the win for Dension in the 500 free by almost four seconds. Only a freshman, Wisner finished in 5:05.08.

While she fell short of the win in both breaststroke events, Wei was able to come away with a win of her own on the day, grabbing the 400 IM victory. Racing against Dension freshman Alix O’Brien, Wei finished in 4:33.00.

The Kenyon women closed out the meet with another relay win, with Alex White, Geboy, Hart, and Emmie Mirus touching 3:31.45.

The men’s side of the meet saw the top two teams in the CSCAA pre-season poll faceoff, with the #2 ranked Keyon Lords coming out victorious over top-ranked Dension. Kenyon was dominant in the meet, claiming the victory in all but one event and finishing with a score of 208.5 to 91.5. For Denison, the loss marks just the second time that the team has ever had over 200 points scored against it.

Kenyon started the meet off strong from the beginning, grabbing the win in the 200 merely relay by almost two full seconds. The team of Yurii Kosian, Luis Weekes, Marcus Hong, and David Fitch combined for a final time of 1:31.03, easily topping the top Denison relay.

The Lords continued their dominance into the individual events as well, with Colin Bowling taking first in the 1000 free in 9:38.54. Bowling wasn’t done after his first win of the day, going on to also grab a win in the 500 free (4:41.42). He was followed in that event by teammate James Tracey, with Dension’s Christian McIntire rounding out the top three.

After helping lead his team to a win in the 200 medley relay, Kosian secured two individual wins as well, sweeping the backstroke events. In the 100, he won by nearly a second and a half, topping Denison’s Chris Luus with a time of 50.36. In the 200 he led teammate Nicholas Tong by an even larger margin, winning in 1:51.27.

Grabbing the only win of the day for Dension was Richie Kurlich in the 200 fly. Kurlich, who was the 8th place finisher in the event at the 2019 NCAA Championships, touched in 1:50.90.

In his only individual event of the day, Aleksa Dobric grabbed the win in the 100 free. The Serbian national who represented his country at the 2019 European Junior Championships finished in 46.51.

Kenyon closed out the meet with a time of 3:03.62 in the 400 free relay. The team consisted of Kosian, Liam Sweeney, Joe Black, and Dobric.