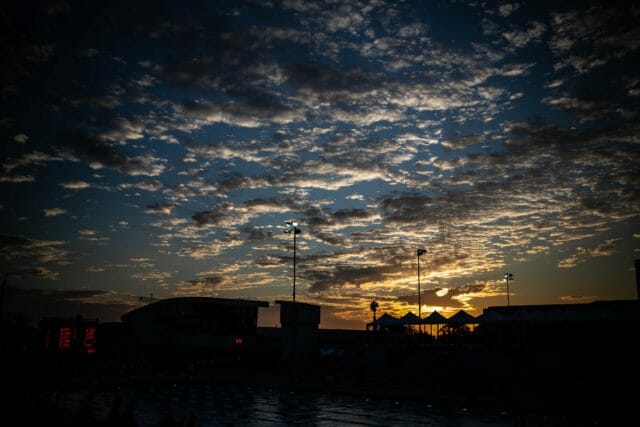 After winning the meet last year, Chaparral High School repeated as AIA Division I women’s state champions in dominant fashion. The school was a cut above from start to finish, scoring over 100 points more than runner-up Red Mountain. Desert Visa rounded out the top-3.

Chaparral came out strong in the 200 medley relay and didn’t look back. The team of Blakely Schuricht, Cydnie Perkins, Asha Bansal, and Hope Felner combined to win by nearly a full second, touching in 1:46.63.

Kennedy Noble, who just last month was competing at the World Cup meets in Budapest and Berlin, doubled up on event wins for Millenium High School, taking first in the 200 IM and 100 back. Both her wins came by wide margins, with her time in the IM being 1:59.53 and her backstroke time being 52.72.

Along with winning both events, Noble also set the state record in both. In the 200 IM, she broke Caitlin Leverenz‘s previous record of 1:59.64, set in 2006, and also overtook Emily Mastin, who previously ranked second all-time to Leverenz at 1:59.82. Noble had ranked third with her time of 2:00.70 from last season.

This summer, Noble finished 20th in the 200 back and 9th in the 100 back at Wave 2 of the U.S. Olympic Trials. She’s set to join the NC State Wolfpack next fall.

Taking the 50 free was Sophia Jahn, a junior at Red Mountain. In a right race with Hamilton’s Audrey Pickles, Jahn came away with the win in 23.49. Pickles was just behind her in 23.68.

Topping 200 free winner Clare Luken in the 100 free was Caelle Armijo, who won the event for the second straight year. A sophomore at Sandra Day O’Connor High School, Armijo finished in 50.64.

Red Mountain picked up a win in the 200 free relay behind a big lead-off swim from 50 free winner Sophia Jahn. With Jahn leading off in 23.50, the Red Mountain team of Jahn, Dakota Klein, Tatum Cooley, and Remi Wallace finished in 1:36.43.

Emma Becker claimed the win in the final individual race of the weekend, the 100 breast. The 2022 Florida International commit ran away with the race, touching in 1:03.67.

Chaparral closed out the women’s meet by taking the title in the 400 free relay. Felner and Schuricht combined with Grace Dunn and Ava Cunningham to finish in 3:30.29.

The women’s 1-meter diving event saw a pair of seniors tie for the top spot, with Chaparral’s MacKenna Stocker and Perry’s Amayah Wiley both scoring 453.55. Third-place finisher Ruby Pickron was just behind the pair with a score of 452.25.

Desert Vista pulled away with the win in the final event, sitting in second until the 400 free relay. For the first time since 1987, Brophy Prep was defeated at a state championship meet in which they competed. Last year the team didn’t compete due to COVID-19 cases on the team.

Chaparral and Desert Vista set the tone for the tight battle between the two schools in the 200 medley relay, with Chaparral pulling off the win by just .01 in a time of 1:34.39.

Desert Vista came back in the 200 free, with Jack Luken picking up the first of his two wins. Winning the event by over a second, Luken finished in 1:38.62. Later in the meet, he also picked up a win in the 500 free with a time of 4:28.23. This is the second straight season that Luken took the win in the 500 free. Luken announced his commitment to swim at the University of Michigan earlier this week.

Luken was the only one to double up on event wins on the men’s side. Evan Nail grabbed a pair of wins, topping the field in the 200 IM and 100 back. The Arizona State commit claimed the IM in 1:48.32 before winning the back in 48.73.

Caleb Stanley won a tight race over Nolan Ford in the 50 free, touching out Ford by just .04. Stanley finished in 20.88.

After finishing second to Nail in the 200 IM earlier in the meet,  Colby Raffel came away with the win in the 100 fly. The Sunnyslope improved on his second-place finish from last season, dropping over a second in the event from that meet to win in 49.05.

After racing the 200 and 500 free last year as a sophomore, Tristan Dalbey made the switch to the 100 free, with the decision paying dividends for the Chaparral junior. Dalbey came away with the top time of 45.93. He was the only swimmer to finish under 46.0 in the event.

Two events later Dalbey was joined by Joel Maldonado, Jasper Brown, and Kellan Pattison to take the win in the 200 free relay. The team finished in a time of 1:24.84.

Tres Mungia played a key role in Desert Vista’s comeback over the final two events, winning the individual 100 breast before swimming the third leg of the school’s 400 free relay. In the breast, he won by over a second, finishing in 56.29. Luken, Ryne Davenport, Stanley then joined him on the 400 free relay to win in 3:05.73, completing Desert Vista’s comeback to take overall meet win.

On the diving board, it was Daniel Knapp from Skyline who took his third title. Knapp, a senior, won the event as a freshman and junior. This year he finished with a score of 554.75.