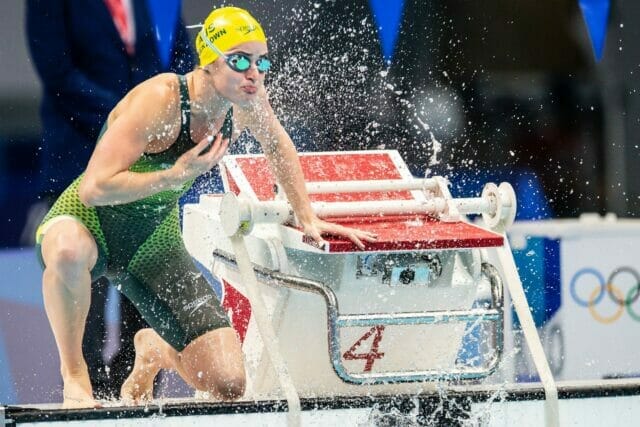 Kaylee McKeown, one of the stars of the Tokyo 2020 Olympic Games, is currently doing trial runs with several of Australia’s top coaches as she seeks a new training base.

Following an immensely successful 2020 Olympic campaign, winning three gold medals and one bronze, McKeown’s future training hub came into question after her coach Chris Mooney accepted a new job as the head coach of Bond University. Mooney had previously coached McKeown with Spartans Swimming at the University of the Sunshine Coast (USC).

This immediately begged the question: Will McKeown follow Mooney? Will she stay put? Will she go elsewhere?

Speaking to Coleman Hodges on the SwimSwam Podcast, McKeown revealed that she’s currently doing 1-2 trial runs each with coaches Michael Bohl, Dean Boxall, Mooney and whoever takes over as the new USC coach in Mooney’s place (there’s word that Michael Palfrey is in line for that position, but nothing has been confirmed).

Bohl currently coaches at Griffith University on the Gold Coast, leading the likes of Emma McKeon—who is coming off a record-setting seven medal haul in Tokyo—and seven-time Olympic medalist Emily Seebohm. It was also recently announced that 2016 Olympic champion Mack Horton would be joining the program.

Boxall is the head coach at Brisbane-based St Peters Western Swim Club, with his training group headlined by another breakout star of the Tokyo Olympics, Ariarne Titmus.

Titmus won gold medals in the women’s 200 and 400 freestyle, with the latter being an epic head-to-head victory over defending champion Katie Ledecky, and she added a silver in the 800 free and a bronze in the 4×200 free relay. Titmus also came incredibly close to breaking a pair of vaunted world records in the 200 and 400 free at the Australian Olympic Trials.

McKeown will also experiment training with Mooney at Bond, along with the new coach of the USC Spartans.

She told SwimSwam that she wants to go somewhere where there are high-level athletes and doesn’t know when she will make a decision.

After debuting at the 2017 World Championships shortly after her 16th birthday, winning a silver medal on the mixed 4×100 medley relay and placing fourth individually in the 200 backstroke, McKeown won a pair of silver medals at the 2019 Worlds (200 back, women’s 4×100 medley) before becoming the best female backstroker in the world over the last 12 months.

After inching towards it multiple times, the 20-year-old broke the world record in the women’s 100 backstroke at the Australian Olympic Trials in a time of 57.45, and followed by winning Olympic gold in a time of 57.47.

In the 200 back, McKeown set a new Commonwealth and Australian Record of 2:04.28 at the June Trials, cementing herself as the third-fastest woman of all-time, and then won Olympic gold in 2:04.68.

Stay tuned to SwimSwam’s YouTube channel for the full conversation with McKeown.