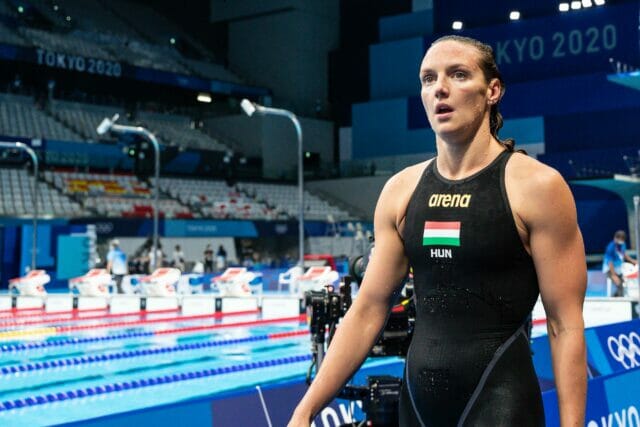 Hungarian swimmer Katinka Hosszu has tested positive for COVID-19, she posted on her Instagram story on Friday. The Team Iron captain says that she won’t race in Eindhoven this week during the ISL season and “not for a while.”

Hosszu, who like most of Hungary’s Olympic team was vaccinated very early this year, has not yet competed for Team Iron in the 2021 International Swimming League season. She was in attendance at the regular season, watching from the team box, and was on the team’s official roster for the playoffs, but Iron’s general manager Dorina Szekeres was non-committal even before the COVID-19 diagnosis about whether Hosszu would compete.

With Iron unlikely to advance to the final, and mandatory quarantine periods in place, it now seems likely that Hosszu won’t race in the playoffs either.

After switching coaches, Hosszu has been unable to match the same level of success in the water as she had while training under then-coach and husband Shane Tusup. She entered 4 races at the Tokyo 2020 Olympics, scratching the 020 fly, finishing 20th in the 200 back, 7th in the 200 IM, and 5th in the 400 IM.

She has only raced once since the Olympics, swimming last week at the Hungarian Short Course Championships (and missing Iron’s opening ISL match in the process). There she cruised to a 1:00.22 in the 100 IM and 2:11.71 in the 200 IM – both of which are well short of her lifetime bests in those events of 56.5 and 2:01.8.

Hosszu ranked 33rd in the 2020 ISL regular season in MVP scoring, averaging just over 27 points/match. Even not at her peak, she was still Iron’s 4th-best scorer last season.

Iron is scheduled to race on Saturday and Sunday in a meet against Cali Condors, London Roar, LA Current, and Iron.

The Netherlands put into effect new COVID-19 restrictions last week that included a ban on spectators at indoor sporting events. That means the remaining ISL playoff matches, at least, will be spectatorless.

The Netherlands, like much of Europe is in the midst of a substantial spike in new cases of COVID-19. The country recorded 23,591 new cases on Thursday, which is 14% more than Wednesday – which was the previous daily record.

Deaths, a lagging indicator in COVID-19 spikes, have begun to increase too, though are not at record levels. The country has averaged 28 deaths per day over the last week attributed to COVID-19.

Hungary, where Hosszu raced last weekend, is seeing a spike as well, though it is not quite as bad as the Netherlands. The country is averaging 7,969 new cases per day in the last week, or about 82/100,000 residents.