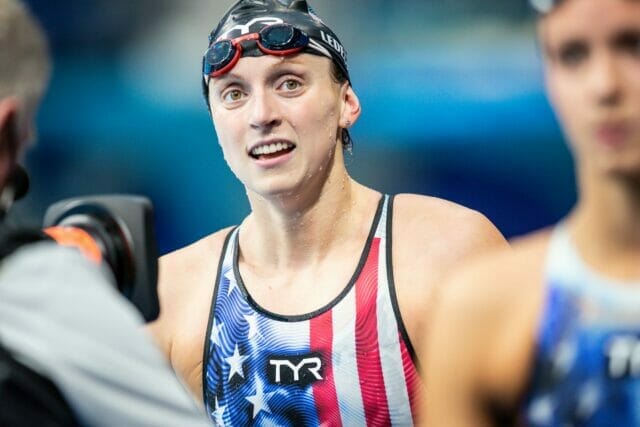 The Florida Gators were swimming without two of their biggest stars on Friday, racing against traditional rivals Georgia, but the men’s 500 free still had a very, very big name.

Kieran Smith and Bobby Finke, who both finished in the top 6 in the 500 yard free at last year’s NCAA Championship meet, both missed Friday’s meet. But entered in that 500 free was the University of Florida’s new volunteer assistant coach, and the fastest woman ever in the 500 free, Katie Ledecky.

Ledecky, swimming as an exhibition athlete, raced in the men’s 500 free, where she swam 4:30.55. That’s her first official 500 yard free swim since the 2018 NCAA Championships, which was the last of her collegiate career at Stanford.

She also raced to a 1:42.80 in the men’s 200 yard freestyle event, also racing in a separate exhibition heat.

Kieran Smith led off the team’s 200 medley relay in the season-opener against Florida Atlantic earlier this month, but with him absent, freshman Adam Chaney was left to that slot, and he split 21.73.

The standout split for the Georgia medley relay came from sophomore butterflier Luca Urlando. His 19.89 is faster than Georgia’s Camden Murphy swam on the team’s “A” relay at NCAAs last season, and would have been the 6th-best split at last year’s NCAA Championship meet.

Each of the three times are also the #1-ranked time in the NCAA so far this season.

The Florida men used a full team effort against Georgia. Among the 8 individual victories, only two came from double winners: Leonardo Garcia, who swept the diving events, and Dillon Hillis, who swept the 100 (54.82) and 200 (2:00.31) yard breaststrokes. They went at least 1-2-3 in both of those events, which both highlights their depth and Georgia’s weakness in the event.

Those swims are also both #1-ranked times in the NCAA so far this season.

The women’s meet was much tighter in the team score, with each team winning 8 events throughout the meet.

The Georgia women went 1-3 in the opening 200 medley relay to take the early lead in the meet. The young Bulldog relay of Eboni McCarty, Joie Hartman, Dakota Luther, and Maxine Parker combined for a 1:39.72 to win the opening relay.

After that, however, the Florida Gators took the charge, including a sweep of the diving events by Elizabeth Perez, leading a 30-8 scoring advantage in those events alone.

But Georgia wasn’t done yet. Starting with the women’s 200 breaststroke, where junior Zoie Hartman won in 2:12.25, the Bulldogs won the last 5 wins of the meet.

She was followed by Abby McCulloh, who won the 500 free in a collegiate-best time of 4:45.38. So far in her NCAA career, she has 4 wins in 6 individual swims, and has never finished lower than second-place.

The Gators had a lot of 2-3 finishes in that stretch, and while that still means they were outscored, they had enough cushion going into that stretch to hold on for the victory.