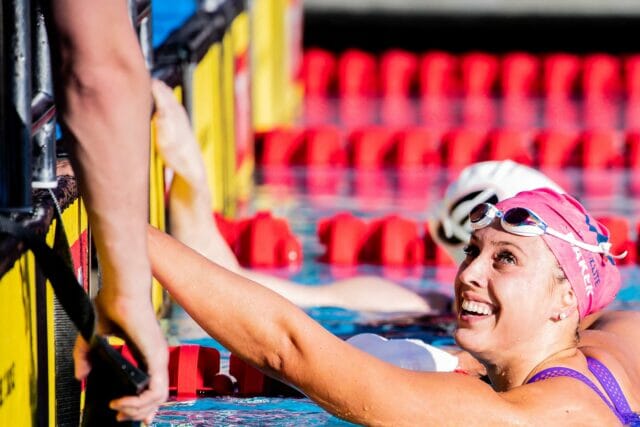 Baker, a member of the ISL’s LA Current, primarily trains at Team Elite in San Diego under coach David Marsh, but was planning on spending time in North Carolina—her home state—prior to the next round of ISL meet and has been welcomed at NC State.

NC State and Wolfpack Elite head coach Braden Holloway confirmed that the training move, at least for the time being, is temporary.

“Kathleen is currently here training with Wolfpack Elite and preparing for the next ISL segment,” Holloway told SwimSwam.

“She is spending some time in the North Carolina area and we are working with Coach Marsh to help move her forward while she is here in North Carolina.”

Baker added: “Braden has been awesome and super accommodating in letting me join his team.”

Baker, 24, competed in three matches during the 2021 ISL regular season, scoring 24 points for the Current.

LA finished fifth in the ISL regular season standings, with the top six clubs automatically advancing to the playoffs, while the last two spots were earned by the DC Trident and Iron in the Play-In Match.

The playoff phase is set to kick off November 11, with the Current’s first match scheduled for the 13th.

A native of Winston-Salem, N.C., Baker won two medals at the 2016 Olympic Games in Rio, claiming gold on the women’s 400 medley relay and silver in the women’s 100 backstroke.

After fracturing a bone in her foot and twisting her ankle in early May, Baker missed qualifying for the 2021 U.S. Olympic team earlier this year, placing fifth in the women’s 200 back, 11th in the 100 back and 11th in the 200 IM at the U.S. Olympic Trials in June.