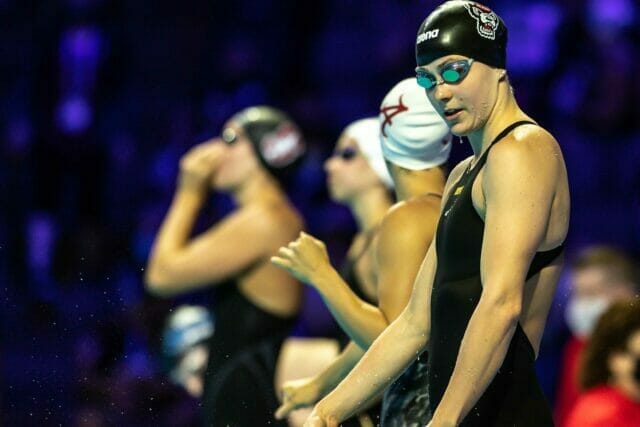 In the first day of duals in Auburn, Alabama, scored as a separate meet, the NC State Wolfpack dominated the competition, sweeping all four of their head-to-head matchups between the men’s and women’s teams.

The more surprising result was the Auburn sweep of the Kentucky Wildcats, especially on the women’s side. Last season, at the SEC Championships, the Auburn women finished 9th, while Kentucky won their first ever title. The two teams never faced off head-to-head during the tenure of Auburn’s previous head coach, Gary Taylor, with their last head-to-head matchup coming in the fall of 2016.

The teams will race again on Saturday morning in mostly off events, including a 2000 free, 150 free, and a series of 75 and 150 yard stroke events.

The NC State men had the fastest finisher in all but one swimming events, including a number of 1-2-3 and 1-2-3-4 results.

That includes in the 100 free, where the #12 recruit in this year’s freshman class Sam Hoover grabbed his first college win. He swam a 43.78, which is the second-fastest time he’s ever been (behind only the 43.10 he went at the 2020 North Carolina State Championship meet). That time ranks him 4th in the NCAA so far this season, and makes him the unly freshman to go under 44 seconds so far.

In that 100 free, NC State went 1-2-3-4, with sophomore Luke Miller (43.88), junior Bartosz Piszczorowicz (43.97), and senior Giovanni Izzo (44.56) following Hoover into the wall. NC State now has three swimmers who have been under 44 seconds this season. Through Thursday’s competition, no other team in the country had more than one.

It’s no surprise, then, that NC State went 1-2 in the 400 free relay to end the session – but more surprising that they did so without Hoover. Miller, Hunter Tapp, Piszczorowicz, and Nyls Korstanje combined for a 2:52.79 win, while the team’s “B” relay of Noah Henderson, David Curtiss, Izzo, and Eric Knowles combined for a 2:57.28 for 2nd place. Auburn finished 3rd in 2:58.00.

This is the second-straight weekend where NC State has flashed toward the top of national rankings, and while some events weren’t quite as fast as last weekend (the 200 medley was 1:25.93, about a second slower), other swimmers plowed through with significant time drops.

The one event where NC State didn’t win was the 100 breaststroke. There, Auburn sophomore Reid Mikuta topped the field in 53.11. That’s already within four-tenths of a second of his time from last year’s SEC Championship meet and already faster than he was at any non-conference-championship meet last season.

NC State went 1-2-3 in the 1000 free, led by sophomores James Plage (9:00.34) and Indiana transfer Will Gallant (9:02.72). Ross Dant, who was 3rd at NCAAs in the mile last season, finished 3rd on Friday in the 1000 free in 9:02.81. For Plage, an NCAA qualifier last season, that 9:00 is an 8 second improvement on his time from last weekend’s dual against Tennessee, and ranks him 3rd in the country this season. Gallant also dropped 8 seconds from the Tennessee meet, while Dant swam about the same time as he was last week.
Auburn senior diver Conner Pruitt swept the springboard events, just barely edging-out Kentucky’s Mingli Zhang in the 3-meter by half-a-point, and winning by a more comfortable 14 points on 1-meter.

While the scores were just as lopsided in the women’s meet as the men’s for NC State, the Kentucky women were much more competitive with the Auburn women, and even picked up 4 event wins in the meet.

NC State returns most of that relay that was the NCAA Champion last season.

While the breast, fly, and free legs were a little slower than last week against Tennessee (Kylee Alons swam the fly leg in that meet), the leadoff leg from the junior Berkoff was .13 better than she was a week ago.

Abby Arens also jumped to a top 3 ranking in the NCAA via a 1:56.19 season best to win the 200 fly. She finished exactly three seconds ahead of the runner-up Avery Bargeron of Auburn, a freshman, who swam a season-best of 1:59.19.

Alons swam 3 individual events and only one relay, which set up a pair of marquee matchups against Riley Gaines, who is the defending SEC Champion in the 200 free. Alons won the first head-to-head of the day in the 50 free by a margin of 22.61-22.86, but after a diving break, Gaines fought back to win the 100 free 49.28-49.40. The two were locked neck-and-neck throughout the race, with Gaines holding a small margin at the turn and stretching it out by a few hundredths on the back-half of the race.

Kentucky head coach Lars Jorgensen was honest about his team’s performance, highlighting some successes but saying that the Wildcats needed more swimmers to “step up” at this level.

“Riley [Gaines] was awesome today with some high-level swims, as was Gillian [Davey] and Lauren [Poole]. Our divers also performed well on the boards,” said head coach Lars Jorgenson. “We competed against two quality teams in Auburn and NC State, and we just didn’t have enough people step up today. We will build upon this and use this as a learning experience going forward with the rest of our season.”

Kentucky also picked up a sweep of the women’s springboard events with wins from Morgan Southall.

Sophie Hansson, a senior for NC State, won the 100 breaststroke in 59.11 – by more than two seconds. She’s the defending NCAA Champion in that event. That’s a season-best for her. She later won the 200 breast in 2:10.25, which is a few tenths slower than she was last week against Tennessee.