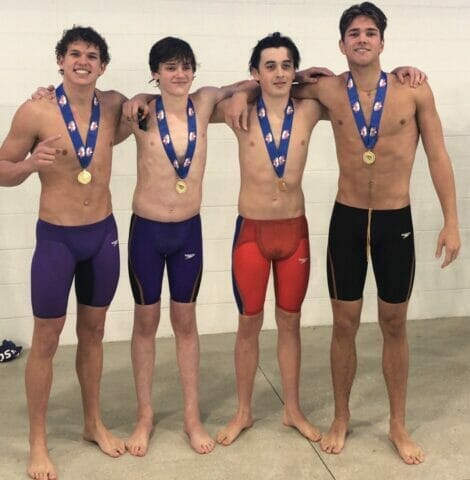 The state of South Carolina took its ceremonial place at the front of the parade of high school state championship meets two weeks ago in North Charleston when they hosted the boys’ and girls AAAAA state swimming championships.

In South Carolina high school swimming, there are three divisions: AAA, AAAA, and AAAAA. Schools in the AAAAA division are the largest of the three. The state doesn’t include diving in its championship meet.

The boys’ champions came from JL Mann High School, which won its third consecutive AAAAA championship, and the girls’ meet was won by Wando High School in dominant fashion.

The boys of JL Mann won their third-straight state title in the state’s biggest division, pulling off a narrow four-point victory over Wando High.

Even in the estimation of their own coach, Cile Williamson, the win was a surprise.

“Winning for a third year was so rewarding because it was a little unexpected,” coach Cile Williamson said. “At the start of the season, we were looking at more of a rebuilding year. We lost seven state swimmers from last year’s team and were left with a lot of young swimmers to balance out our two fastest swimmers from last year. The young guys really came through for us this year, and they were the difference between winning and losing what turned out to be a close competition.”

In the first two relays of the meet, Mann was outmatched by Wando. In the 200 medley relay, the teams went 1-2, with Wando winning in spite of a Bennett Parramore 24.05 on the leadoff leg for Mann. Wando’s winning relay of Charles Green, William Slowey, Mason Camp, and Chase Healey touched in 1:37.00, with Mann just behind in 1:37.03.

But Mann had some highlight splits there. Besides Parramore’s backstroke, which was the fastest in the field, they also had a 20.26 anchor leg from uncommitted high school senior Ben Bannister. Both swims were harbingers of big individual points to come.

In the 200 free relay, it was Wando that finished 2nd, this time half-a-second behind the winning relay from Chapin High. Chapin didn’t have the depth at this meet to contend for the state title, but their top end is very good. The relay included Tyler Broussard, Gage Kukucka, Joshua Tomlin, and Simon Thompson. Thompson, the only junior on Chapin’s relay, anchored in 20.35.

That swim came after he had already won the 50 free (20.73) and 100 free (45.51) individually, both in lifetime bests. The aforementioned Bannister was second in both races, earning him 42 individual points.

But Mann took a gamble. Lacking the depth to go fully after all three relays after those seven graduations from last season, they decided to stack the bookends, leaving the 200 free relay to place just 13th. That earned them a 26 point deficit behind Mann.

What that also allowed, however, was for Mann to stack the closing 400 free relay – a relay where they swam 3:14.50 to dominate the field by almost three seconds. Parramore, Cam Wright, freshman Brayden Franklin, and Bannister combined for the win in that relay, with a Bannister 45.93 anchor blowing the race wide open. But they still needed help: a 3rd-place finish for Wando would have tied the meet and a 2nd-place finish would have won it.

But it was again Chapin that played the spoiler, finishing 3rd in 3:17.96, blocking Wando out of the podium in that relay and securing the team title for Mann.

Mann, in spite of the deficit in the 200 free relay, won with a handful of big individual wins and depth in distance events that don’t necessarily help with relays. Parramore, after having the fastest split in the medley relay, won the individual 100 backstroke in 51.88. That just-missed his previous lifetime best of 51.70 – but that’s actually a great sign, given that his short course peaks are usually at spring Sectionals, not the state meet. Last year, for example, he dropped 1.3 seconds between the two meets.

With more big graduations coming for Mann next season, and relatively-young rosters from Wando and Riverside, this could be the end of the team’s run, but for this year, they’ll celebrate once more as champions.

Rhett Moore, an uncommitted senior from Spring Valley High School, won the 200 free in a new personal best of 1:42.29. That cut over three-and-a-half seconds from his personal best in March. Last season, he had top-6 finishes at the state meet in the 500 free and 100 fly, and after swimming those two events at the Region meet (including a best time in the 500 free), it looked like he might swim them again. An event change, though, led to his first state title and a big recruiting bump as national signing day nears.
Another uncommitted senior, Robin Domingo from Byrnes High School in Duncan, South Carolina, won the boys’ 200 IM in 1:54.76. That shaved about .02 seconds off his previous lifetime best in the race. Impressively, he actually built his lead on the breaststroke leg over Wando’s William Slowey, who would later go on to place 2nd in the 100 breaststroke individually.
Later in the meet, Domingo picked up a second victory in the 100 fly, touching in 51.10. He was 4th in the 100 fly and 5th in the 200 IM last season.
Riverside junior Nick Bracall won the 500 free in 4:38.83, three-and-a-half seconds ahead of the aforementioned Green. That missed his lifetime best by half-a-second, but is almost seven seconds faster than his 4th-place time from last year’s state meet. Last year’s state runner-up Caeden Stratton slid to 8th this year, and the rest of the top 5 from the 2021 meet either graduated or chose other events this season.
Matthew Swain, yet another champion who is an uncommitted senior, won the 100 breaststroke in 56.96. His previous best time was a 59.98. He also finished 7th in the 100 fly in another best time of 53.54.

Notable absence:Spartanburg star senior Kirsti McEnroe, who is headed to Stanford in the fall, skipped the State Championship meet after winning the 100 and 200 free last season, including setting a new state record in the 200 free. Instead, she attended the USA Swimming National Select Camp in Chula Vista, California. McEnroe told local media that she had “100%” support of her teammates, saying that it was “one of her goals forever to make this camp and it’s such an honor.” She decided to attend the camp as part of her bigger international goals. Her younger sister, Teagan McEnroe, continued the family legacy as the youngest of three McEnroe sisters, finishing 3rd in the 200 free in 1:56.58.

The girls’ meet was written as a very different tale from the boys’ meet. The Wando girls established dominance early, winning the 200 medley relay by over 3 seconds, and never looked back as they roared to a 114.5-point margin of victory.

Unlike last year, where they won the state meet with just a single event victory, this year Wando won four out of 11 events.

The meat began with Sophia Frece, Mary Shaw, Illyanna Lightfoot, and Eliza Baxter combining for a 1:45.80 in the 200 medley relay. All four swimmers on that relay are seniors.

While Wando continued to build a lead with depth (two in the top seven of the 200 free, two in the top nine in the 200 IM, a 2-3 finish in the 100 fly, they didn’t get another win until the 100 backstroke, which was the ninth event of the night.

There, senior Sophia Frece swam a 56.11 to win. Frece, who like the rest of Wando’s 200 medley relay hasn’t publicly announced a college commitment yet, knocked three-quarters-of-a-second off her lifetime best in that 100 fly. That is one of three lifetime bests for her at the meet, along with a 56.92 in the 100 fly and a 52.76 in the 100 free.

One event later, it was Mary Shaw’s turn for gold, winning the 100 breaststroke in 1:04.07. She didn’t stand alone atop that podium – Spartansburg freshman Caroline Byers tied her for the victory (after placing third last season as an 8th grader).

Wando finished the meet with another high-margin victory in the 400 free relay, where Frece, Halle Schart, Mary Shaw, and Eliza Baxter combined for a 3:36.58. Fort Mill was 2nd in 3:38.32.

Fort Mill sophomore Olivia Corbi cashed in on the absence of defending champion Kirsti McEnroe, who skipped the meet to attend the USA Swimming National Select Camp. She won the 200 free in 1:54.22. That’s almost a second improvement on her lifetime best after an extended competition break. This was a very young field, including two freshmen, a sophomore, a junior, and an 8th grader in the top 5 finishers.
Summerville High senior Cassidy Lima picked up a sprint sweep in the meet. In the 50 free free, she swam 23.92 to hold off JL Mann freshman Lilly Abdella (24.09). She came back two events later to win the 100 free – which was another event absent its defending champion Kirstin McEnroe – in 52.14. That 100 free is a new lifetime best for her.
In between those victories, Fort Dorchester senior Madelyn Routhier won the 100 fly in 56.32. Routhier and Fort Dorchester missed the 2020 State Championship meet after a member of the team tested positive for COVID-19.
Nation Ford shored up their third place team finish via a win in the 200 free relay. There the team of Julia Pou, Ava Padgett, Belle Kolatis, and Emily Eaton combined for a win in 1:39.39, just .18 seconds ahead of the runner-up relay from Dutch Fork. Both Pou and Kolatis are only 8th graders.