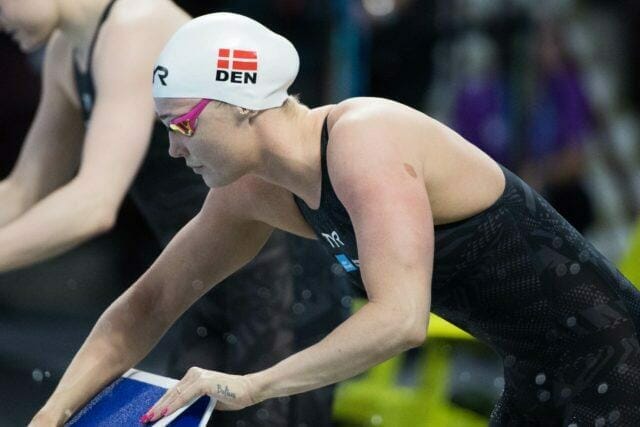 Danish swimmer Jeanette Ottesen has just released her first book today, Thursday, October 20th, with the biography ‘Fri’ documenting the 33-year-old’s life in and out of the pool.

A freestyle and butterfly sprinter, Ottesen has appeared in 5 Olympic Games spanning 2004 to 2020 and has collected nearly 50 medals across all elite international swimming competitions. That resume warrants Ottesen to be known as Denmark’s winningest swimmer in history.

According to the Goodreads description, Fri  ‘is a tale about being the black sheep of the sport, about being doubtful, insecure and excluded. About the pursuit of acceptance and belonging. About his hatred/love affair with the sport of swimming, about financial hardships in a sport where you lose more than you win.’

Along with details on her aquatic triumphs within the book, however, there are details surrounding the ongoing bullying of retired Olympic medalist Lotte Friis at the hands of Ottesen.

Friis, the 2008 Olympic bronze medalist in the women’s 800m free, trained alongside Ottesen at the National Training Center in Bellahøj, which is where the testy relationship took root.

Ottesen’s book conveys that she and other swimmers bullied Friis as ‘a continuous and solid thing for some years’ but also identified the freestyle ace as ‘a classic victim’ of bullying because ‘she did not make it easy for herself.’

Ottesen’s book continues, “she just lets it go, so she eventually becomes someone you automatically laugh at.” (Danish Media site DK)

TV2 received the following comment from Ottesen specific to this section of ‘Fri’. “I am well aware that some will be outraged. But I say it as it is. It would certainly be easier not to, but somehow I’m actually proud to admit that I’ve made these mistakes.” (TV2)

The situation has not gotten past the other party involved, however, as Friis took to social media to make her thoughts known.

“Today I feel more exposed to the whole of Denmark than I have ever been before. It’s MY story to tell, not hers,” said Friis

“By her need to tell what she perceives as the full story, Jeanette has made sure that my future children, colleagues and everyone else can forever read the story of the “victim of bullying” Lotte.”

We will publish additional updates as they become available.