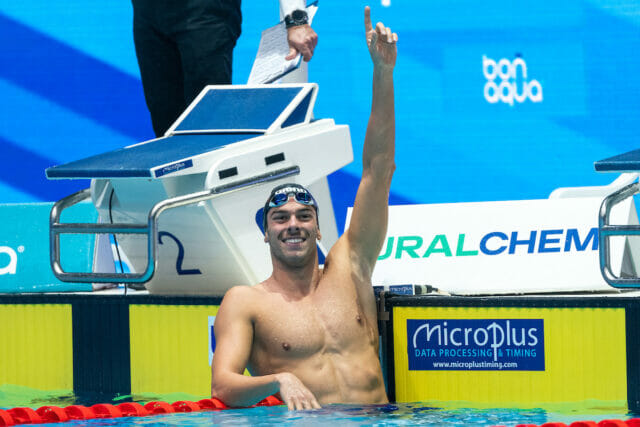 At the end of the final night, the Italians came out on top, barely sneaking past the Russian hosts by 22 points, 1073 to 1051. The full Championships Trophy standings can be found here.

The team scores race quickly turned into a two country contest, with Italy and Russia clearly separating themselves from the field early and eventually both countries nearly doubled the point total from the third place Dutch.

The fatal blow for the Russians was their disqualification of their mixed 4×50 free relay, which ended up costing them the Championships Trophy title. Italy’s 22 point margin of victory was a result of a 34 point margin over the Russians in the mixed relays, which would have been erased without the Russian DQ.

The Netherlands finished third in the Trophy standings, putting up 225 men’s points and 283 women’s points. The Dutch were led by Kira Toussaint, who swept all three of the women’s backstroke races, and their winning mixed relays. The Dutch mixed 4×50 medley narrowly broke the World Record  on the final night of competition in 1:36.18

Sweden’s 4th place finish was led by their women’s team, which scored 240 points. World Record holder Sarah Sjostrom was one of the stars of the meet, having won individual titles in the 50 free, 100 free, 50 fly and 100 fly, while also taking the bronze in the 100 IM. Despite the fourth place finish, Sweden’s men’s team was very weak, having finished well outside the top 10 in men’s team scores.

Poland rounded out the top five countries, narrowly edging out Turkey 159 to 153.