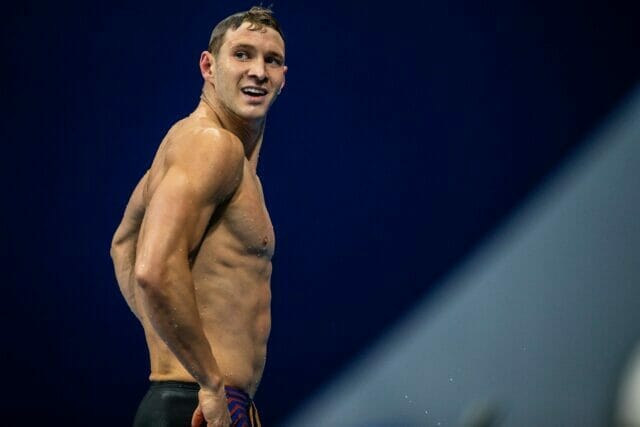 By Torrey Hart on SwimSwam

Start lists are out for Day 2 of the second International Swimming League playoff match of the 2021 season, with a few notable moves. The match as a whole is missing a number of big-name players, including London Roar’s Adam Peaty and Aqua Centurions’ Chase Kalisz.

LA Current’s Ryan Murphy is entered in the men’s skins race today, which is butterfly, alongside teammate Tom Shields. Murphy, the multi-time Olympic medalist in the 100 and 200 backstroke, made his ISL season debut Saturday, winning the 50 and 200 back; he’s also entered in the 100 back on Sunday. Murphy swam the 50 fly in last season’s final, going 22.65 for fifth place. Maxime Rooney, who was as fast as 22.58 to take third in a fly skins race last season, could have been another option for LA today.

In the women’s skins race, which is breaststroke today, Aqua originally entered Lidon Muñoz, but an updated start list showed she was subbed out for Elena di Liddo. Di Liddo, however, was then subbed out for Arianna Castiglioni, Di Liddo told SwimSwam’s Giusy Cisale.

Castiglioni, the fastest female 50 breastroker in the league this season, sat out Day 1 of the meet with flu-like symptoms. In her absence in today’s 100 breast, Aqua Centurions are going with Laura Taylor — who is a middle-distance freestyler and butterflier — in the 100 breast. Castiglioni is the second-fastest 100 breaststroker in the league this season, behind only Lilly King. Taylor doesn’t have any official breaststroke times on record.

Also of note, backstroker Cole Pratt is out once again for the Toronto Titans on Day 2 of ISL Playoff Match 2. Pratt was absent from his assigned lane during the men’s 200 backstroke race on Saturday, and Toronto spokesperson said he has been dealing with a sore shoulder for a few days. Assistant general manager Dylan Kent said that Pratt would be a ‘day-to-day’ decision.