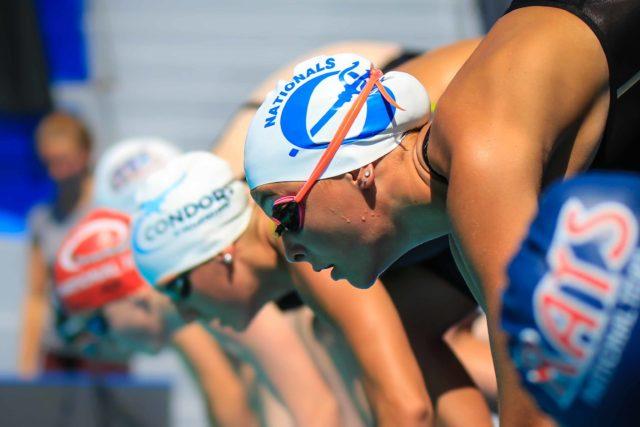 The 2021 Girls Iowa Swimming State Finals ended in dramatic fashion as there was a new team champion crowned. The Waukee Warriors won their first team state title in school history on Saturday, amassing 357 points, over 100 more than the runners-up Ames, the defending team champions. Ames hasn’t placed lower than 2nd place in the state meet since 2010.

Waukee’s state title run was led by junior Jessi Wigham who amassed 40 individual points for the Warriors. Wigham won the 200 free (1:50.12), 500 free (4:56.64) individually and served critical legs on Waukee’s freestyle relays. She was the runner-up at last year’s state meet in both events.

The 500 free/200 free relay double is always tough for a swimmer, but Wigham was still able to split a 23.36 at the end of Waukee’s relay that finished in 2nd place. However, the 500 may have taken too much out of her, as she couldn’t hold off Ames’ Donald who anchored their state-winning relay in 22.61.

After some rest, Wigham anchored Waukee’s 400 free relay, where she was able to hold off a charging Scarlet Martin, who had the fastest split in the field by far (49.66). Wigham leaves the 2021 state meet with three state titles and a team championship.

Wigham has not yet announced a college commitment.

In addition to Wigham’s clutch performances, Waukee picked up an additional four 2nd-place finishes and five 3rd-place finishes from individuals and relays, which highlights Waukee’s depth this season. Nearly every swimmer on the Warrior’s roster helped score points for the team.

Ames had a great run for 2nd place, winning two relays and two individual events. Ames was led by their star senior, Meghan Donald, who also earned 40 individual points after repeating as state champion in the 50 (23.17) and 100 (50.49) freestyle events. Of note, Donald was significantly faster in prelims, swimming 22.60 and 49.97, nearly breaking Maddie Gehrke‘s state record of 22.51 from 2014.

Junior Olivia Swalley took advantage of the absence of Scarlet Martin, who was the 2020 state champion in the 200 IM, as she wins in 2:01.85, nearly 3.5 seconds over Hayley Kimmel.
Grace Frericks (54.67) out-touched defending state champion Scarlet Martin (54.92) in the 100 back. Both girls had the exact same back-end split (28.19), but Frericks was able to get out in front with her early speed, as she out-split Martin 26.48 to 26.73.
Olivia Swalley successfully defended her 100 breast state title (1:02.98), which marked her as the only swimmer under 1:03 in the event.
Junior diver Avery Hogan of Waterloo East won the state title in the 1 meter event after placing 10th in 2020.