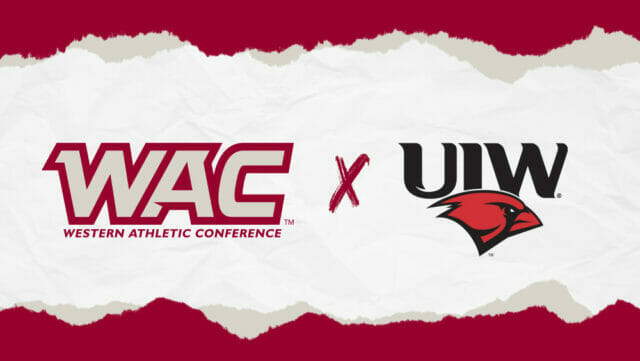 University of the Incarnate Word (UIW) has accepted an invitation to join the Western Athletic Conference, along with its men’s and women’s swimming and diving program, beginning in the fall of 2022. The WAC sponsors both men’s and women’s swimming, meaning that Incarnate Word will leave the CSCAA – further eroding a conference that was designed to house college teams that had no swimming & diving home anyway.

Most of Incarnate Word’s sports teams previously competed in the Southland Conference.

The move is the latest in a total upheaval of college conference alignments ahead of the NCAA constitutional conventions that begin later this month. The WAC will expand to 14 teams with the further addition of Southern Utah, which doesn’t sponsor a swimming program.

Incarnate Word will become the WAC’s only school to sponsor all 20 sports that the WAC holds championships in. UIW was already an affiliate in men’s soccer. The school’s football team plays in the FCS (formerly 1-AA).

6 men’s teams and 8 women’s teams competed at the 2021 WAC swimming & diving championships. On the men’s side, UNLV dominated for the title, while Northern Arizona beat out New Mexico State for the women’s title. Multiple programs in the conference, including UNLV, Air Force, and Grand Canyon, are regular participants at the NCAA Championship meets.

Incarnate Word’s main campus is located in San Antonio, Texas. With an undergraduate enrollment of just over 5,000 students, it is the largest Catholic university in Texas and the fourth-largest private university in Texas. The school also has locations throughout South and Central Texas, plus two campuses in Mexico and a European Study Center in Strasbourg, France.

Other CCSA programs that are on the move for their primary conferences in the near future include Liberty, Old Dominion, and Florida Atlantic, though we might not find out immediately which of their future conferences will sponsor swimming.

Incarnate Word’s women’s team finished 3rd at the 2021 CCSA Championship meet, while the men were forced to withdraw because of the historic February freeze in Texas. The Incarnate Word men won the 2018, 2019, and 2020 CCSA titles.