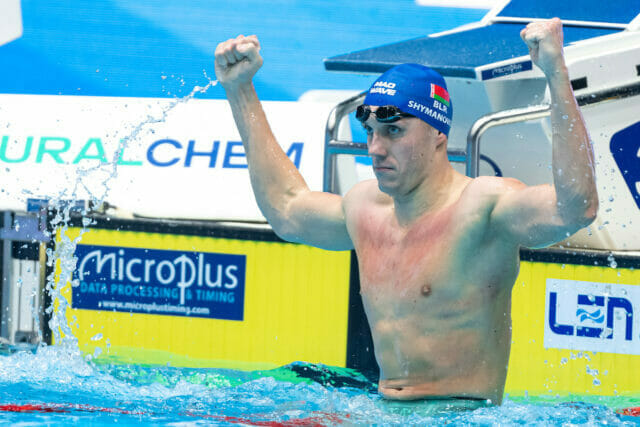 During the final day of the 2021 LEN Short Course European Championships, Belarus’ Ilya Shymanovich tied the 50 breast SCM World Record with his time of 25.25.

Shymanovich tied the record set back in 2009 by South Africa’s Cameron van der Burgh. In the process, he also broke the European record, previously set by Emre Sakci’s 25.29 in 2020, and the SC Euros record, set by Nicolo Martinenghi’s 25.37 set in 2021. Shymanovich also lowered his own Belarusian national record of 25.39, set in 2020.

Shymanovich has been on a roll lately. He earned his first LC European Championships medal earlier in 2021 after he placed second in the 50 breast at 26.55. He also placed eighth at the Olympics in the 100-meter breaststroke.

Shymanovich will walk away from the 2021 SC Euros with podium finishes in all the breaststroke events: a gold in the 50 and 200 breast, and a silver in the 100 breast.