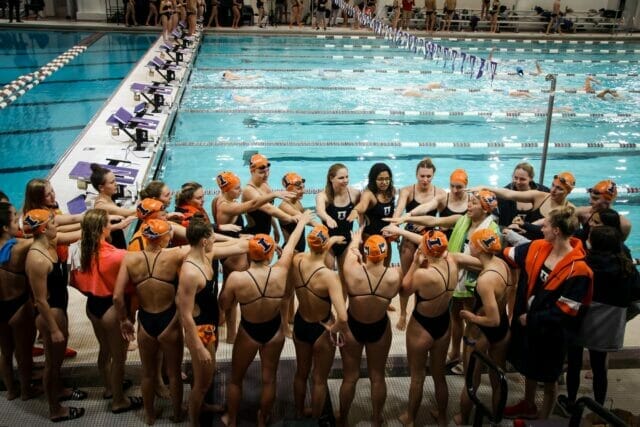 The Illini beat UIC 230-90 and fell to Northwestern 99-197. Current photo via Illinois Athletics

Illinois vs. Northwestern vs. UIC

“It is always nice to come out with a win, but today was definitely a tough meet,” Said Head Coach Sue Novitsky, “We had multiple season bests and improvements across the lineup. Today will help us continue to take steps forward and improve as a team.”

The Fighting Illini found themselves on the podium many more times throughout the meet, with Cara Bognar placing third in the 500 freestyle, 1000 freestyle, and the 200 butterfly. Freshman Sydney Stoll stayed hot with 2nd place finishes in the 200 IM and 500 freestyle.

UIC dove into the 2021-22 season with a meet at Northwestern Saturday morning.  The Flames men and women measured up against their Big Ten rivals from Evanston, while the women were also tested against Illinois.

“This meet was a great beginning of the year test for our team. We know that we will only get better with each competition,” Tim Loeffler said.

Cydney Liebenberg took second in 3-meter diving and third in 1-meter.
Felix Lafortune dove to a second place finish on the 3-meter board, and a third place showing on the 1-meter board.
Christina Neri was the Flames’ top finisher in the 1000 free.
Liam Davis took third, less than a second behind the second place swimmer, in the 1000 free.  He was second in the 200 fly and the 500 free.
Freshman Kalie Landrum made her debut with a fifth place finish in the 200 free.
Josh Dellorto and Tyler Schwertfeger came in fourth and fifth in the 200 free.  Dellorto also had the team’s best finish in the 100 free and 100 fly.
Lizzie Zeller was seventh in the 100 back and in the 200 back.
Owen Zant had the team’s best time in the 100 and 200 back.
Taira Juronis and Ben Ramminger paced the Flames in the 100 breast.  Juronis and Kyle Lewarchick had the women’s and men’s best times in the 200 breast.
Lilly Culp was seventh in the 200 fly and fifth in the 100 fly.
Jeff Wiedoff came in second in the 50 free.

The Flames will return to action next week against Horizon League foe Milwaukee.
The dual meet will start at noon from Milwaukee’s Klotsche Center.