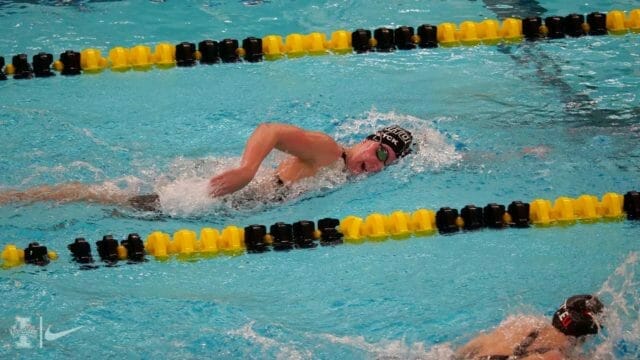 Seattle U vs. Idaho

SEATTLE – The University of Idaho swimming and diving team earned their first win of the young season on Saturday with a dominant 189-72 road victory over Seattle University.

The Vandals posted wins in 12 of the 14 total events, and also took second place in 10 events. With the victory, Idaho improved to 1-1 in WAC competition.

“This was a great team effort with contributions from seemingly every class,” said Head Coach Mark Sowa. “We took our lumps a couple of weeks ago and learned some good things. This is a long journey that is still in its early stages, but our upperclassmen are really helping to steer this ship. I look forward to seeing what we can become in the next couple of months.”

Idaho was led by junior Alexa Teneyck, sophomore’s Zoe Froh and Ani Husaby, and freshman Laura Fernandez-Rodriguez, who each won two individual events throughout the day.

The Vandals jumped out to an early lead and never looked back, winning the first seven events of the morning. Kaling Phung, Holly Keir, Rylie Jones, and Ella Haskins won the 200-yd Medley Relay with a time of 1:49.22 to start the morning, with Husaby, Rodriguez-Fernandez, Emma Stahl, and Natalie Crocker finishing just behind their teammates (1:51.42) to ensure a 1-2 Idaho result.

Next, Teneyck followed up her teammates’ strong relay swim by winning the individual 1000-yd Freestyle (10:49.23). She was followed closely by freshman teammate Amelia Buyers, who came in second with a 10:57.06 time. Later in the day, Teneyck would also win the 500-yd free with a time of 5:17.45, fending off freshman teammate Sarah Shaffer, who took second (5:18.11) and earned another 17 points for Idaho.

In the 200-yd Freestyle, junior Rylie Jones took first-place with a 1:56.00 swim, scoring 20 points for the Silver & Gold. She was pushed by junior Kaling Phung, who touched the wall just after Jones, with a time of 1:56.69.

Ella Haskins swam her fastest time of the season, 24.98, to win the 50-yd Freestyle, earning another 20 points for the Vandals. The freshman from Seattle followed up that swim by taking third in the 100-yd Free, posting a time of 54.37.

In the final swim of the day, Idaho’s 200-yd Freestyle relay team of Crocker, Haskins, Stahl, and Jones took first with a time of 1:39.54.

The Vandals return home to the UI Swim Center on Saturday, November 13, where they will host Grand Canyon in WAC competition. The event begins at 10:00 AM.

SEATTLE  – The Seattle U Redhawks finished off their first home meet of the second, earning two individual event titles and four second-place finishes. Sammy Mosier had both individual wins for the Redhawks against Idaho, winning the 100 Free (53.47) and 100 Fly (58.83).

Allison Plamondon earned a second-place finishing in the 50 Free with her time of 25.14 and was also a part of the 200 Free Relay team that swam a 1:40.86. That team of Mosier, Plamondon, Emilia Culberson, and Anna Edwards finished second in the relay.

The Redhawks remain at home, hosting Puget Sound next on Saturday, November 13 at 11:00 am, with both the men and women competing.