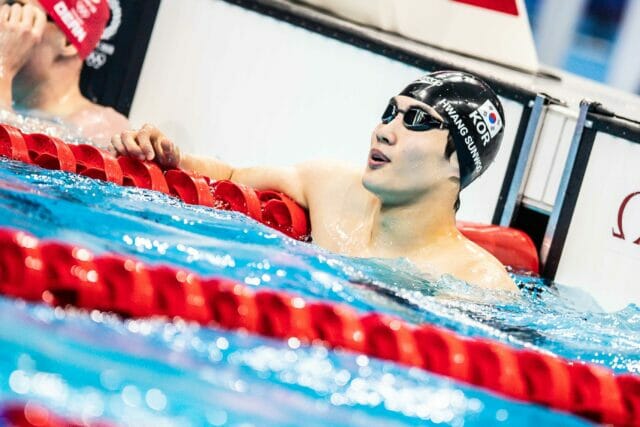 After being one of many South Koreans to set a National Record on the opening day of the 2021 FINA World Cup stop in Doha, Hwang Sunwoo kept the ball rolling on Day 2 by nearing the Korean mark with a blistering swim in the men’s 100 freestyle preliminaries.

The time puts Hwang less than two-tenths shy of the South Korean Record of 46.89, set by the legendary Park Tae Hwan at the 2016 SC World Championships.

Hwang entered the meet without a SCM 100 free on his resume, but did reset the Asian Record in the long course version of the event at the Tokyo Olympic Games (47.56), ultimately placing fifth in the Olympic final.

Australian Kyle Chalmers, who has won the 100 free on both stops of the World Cup circuit so far this year with respective times of 45.73 and 45.50, qualified third overall for the final in 47.55. American Blake Pieroni (sixth, 48.15) is also a factor.

There were only five events contested at Day 1 prelims in Doha due to a lack of entries, and there were even fewer on Day 2 with just three. In addition to the men’s 100 free, we also saw the men’s 50 backstroke and 50 breaststroke.

In the 50 breast it was the Netherlands’ Arno Kamminga qualifying first in a time of 26.29 as he’ll look to make it three straight wins in the event for the World Cup. Kamminga won his third consecutive gold medal in the 100 breast on Thursday.

Qualifying second was South Korea’s Moon Jaekwon, who broke the country’s National Record in a time of 26.43. Moon had set the previous record opening up his 100 breast swim on Day 1 in 26.82.