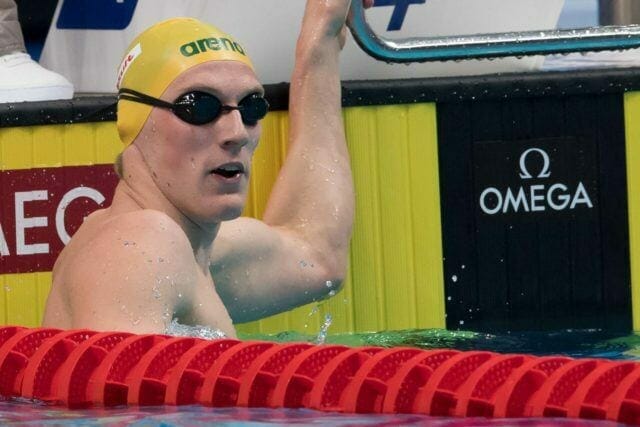 Horton, who has spent the entirety of his competitive swimming career training under the guidance of Craig Jackson at the Melbourne Vicentre, is opting to make the move to coach Michael Bohl at Griffith University on the Gold Coast.

Horton was the 2016 Olympic gold medalist in the men’s 400 freestyle, winning an epic head-to-head showdown with rival and defending champion Sun Yang, and has experienced plenty of international success elsewhere in recent years, including winning a total of five medals at the Long Course World Championships between 2015 and 2019.

However, at the 2021 Australian Olympic Trials, Horton placed third in the 400 free behind Elijah Winnington and Jack McLoughlin, meaning he would not have the opportunity to defend his Olympic title in Tokyo.

Despite the fact that Horton’s time in that Trials final (3:43.92) would’ve won bronze in the Olympic final (American Kieran Smith took third in 3:43.94), and he won his second career Olympic medal, a bronze, as a prelims swimmer on the men’s 800 free relay, Horton felt it was time for a change, especially with the 2024 Games in Paris less than three years away.

Speaking to The Sydney Morning Herald, the 25-year-old said he was thinking about a coaching change while stuck in quarantine post-Tokyo.

“Quarantine brings on a lot of reflecting. It was just something that had been building over the last couple of months. It felt like a few people knew before I did, I didn’t consciously make the decision until quite late,” Horton said.

“The people around me were sensing there was going to be a change. It had been going on in the background for a bit.”

Horton has been training under Jackson in Melbourne for more than half of his life, and says that, with the possibility that 2024 could mark the end of his competitive career, he wants to try something different. The extended lockdowns in Melbourne also played a factor.

“It’s part of, unfortunately, Victoria slowly wearing away at people with COVID and lockdowns.”

Bohl is among the most well-respected coaches in the country. His training group on the Gold Coast includes Emma McKeon, who is coming off a record-setting seven medal haul at the Tokyo Games, along with seven-time Olympic medalist Emily Seebohm and two-time Olympic medalist Madeline Groves.

Horton says that he’s worked with Bohl before, and the two have meshed well.

“He looked after me in Tokyo and Gwangju,” Horton said. “It’s different, I was still doing Craig’s work, so this will be a different experience. This is a full move.

“I think it was a no-brainer for me. He’s just someone I get along with well, easy to relate to. His personality is quite similar to Craig, quiet and chilled. I need that, I don’t need yelling and shouting.

“Our squad in Melbourne is about eight people, they have about 20 up there. I’m looking forward to more people and more energy.”

The Sydney Morning Herald asked Horton if he can find the drive that fuelled him to his Rio Olympic win. His response?

“I bloody hope so. It’s just about getting it out of me. I’m hungrier than ever.”

According to the Herald, Horton applied for a border pass in September to make his way to Queensland, but has yet to hear back.

The next major international competition on the swimming calendar is fast approaching, with Australia slated to hold its 2022 Trials meet in April prior to the FINA World Championships (May) and Commonwealth Games (July-August).