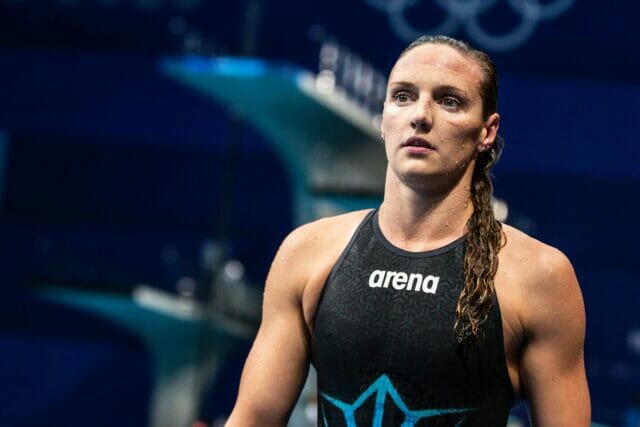 Day one of the 2021 Hungarian Short Course Championships took place today in Kaposvár with the meet representing multi-Olympic medalist Katinka Hosszu‘s return to racing since competing at the 2020 Olympic Games this summer.

32-year-old Hosszu raced tonight in the women’s 100m IM, placing 3rd behind winner Zsuzsanna Jakabos and silver medlaist Dalma Sebestyen. The former grabbed gold in a time of 59.88, the only sub-1:00 outing of the field, while Sebestyen snagged silver rin 1:00.20.

Making noise in the women’s 50m free was Petra Senanszky. The 27-year-old first lowered Hosszu’s national record in the heats with a new mark of 24.37 before she ultimately topped the podium in 24.30 this evening. Senanszky’s new lifetime best overtook the previous Hosszu record of 24.43 she produced in 2014.

The first race saw him narrowly defeat Norbert Szabo with the men separated by just .22. Telegdy got his hand on the wall in a time of 53.38 while Szabo was next in 53.60 with both men within striking distance of David Foldhazi’s 53.00 national record set in 2017.

Telegdy’s previous personal best in the men’s 1IM event entering this meet rested at the 54.10 he swam in 2018. His result here tonight renders him as the 5th fastest Hungarian of all time in the event.

Telegdy next represented the only swimmer to get under the 52-second threshold in the 1back, scoring a time of 51.92 for the victory. That was just .28 off of his own personal best of 51.64 in this event.