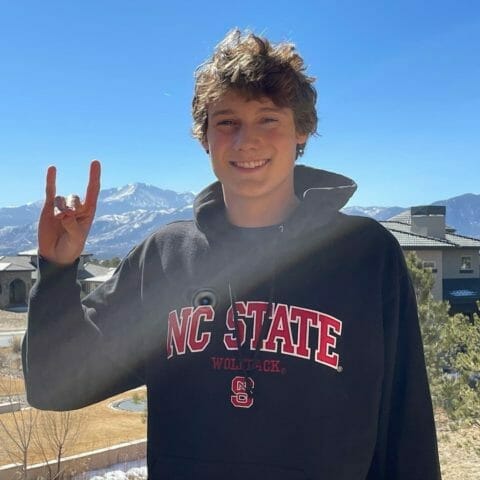 The future of NC State’s men’s sprinting group got a little nastier last weekend, when high school senior Quintin McCarty swam a new lifetime best in the 50 free (and 200 free, and 200 IM).

McCarty, who trains with Pikes Peak Athletics in Colorado, raced over the weekend at a small local meet called the PPA Finals meets. The three-day event was a prelims/finals meet, designed to give swimmers the opportunity to hit some cuts for regional or national level meets.

After a 20.02 in the 50 free prelims, McCarty erupted for a 19.61 in finals. That slashed his previous best time of 19.95 that he swam at the St. George Sectionals in April, and then repeated at another local kickoff meet in September.

McCarty then zooms to the top of the incoming sprinters for NC State.

That list doesn’t include freshman David Curtiss, who by the way was a 19.11 in high school.

And many of those swimmers are very good in other races as well, and there are other top-20 ranked swimmers in their incoming classes. This NC State team is starting to have the feel and depth of programs like the Texas or Cal men, or the Stanford or Virginia women, where there’s a sense of “how are they going to fit all of these guys on the bus?”

Where not only are swimmers arriving and improving, but they’re committing and making monster improvements before they arrive

That’s a turning point for a program like NC State. The Wolfpack, already clearly established as one of the most successful programs in the current college landscape, have still not made that leap to compete for team titles at NCAAs. Texas and Cal have such a deep level of top-class talent and quality that there’s still a substantial gap to the rest of the field.

But NC State is on a recruiting tear that could close that gap and has the potential to make the leap, especially with Texas head coach Eddie Reese on his way toward retirement.

There were other standout swims at the meet.

14-year old Madi Mintenko, who aged up as already one of the fastest 13-14s ever, swam a new lifetime best of 50.19 in finals of the 100 free (which gets a tenth better on altitude adjustment). Primarily a middle-distance freestyler to this point, she also put up a 17:38.98 in the mile – a new best time for her by almost 30 seconds. That time comes down to 17:15.98 with the 23-second altitude adjustment given to the 1650 free under USA Swimming’s protocols.

Another Pikes Peak swimmer, Harvard commit Raglan Ward, swam a best time of 20.79 in the 50 free. His previous best time of 21.26 was done back in August of 2020, in his first meet coming out of coronavirus lockdowns.