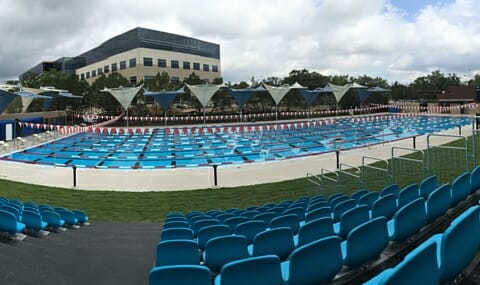 Fink cited differences of opinion with the club’s owners, Megan, Patti, and Kevin Thompson, as the primary driver of his decision.

“I am extremely saddened to be making this announcement, but I am parting ways with Austin Swim Club. Although I enjoyed working with the amazing athletes and coaches at the club, owners Megan, Patti and Kevin Thompson and I have differing opinions and I felt it best at this time for me to go in another direction. I will deeply miss all of the athletes and coaches and am forever grateful for the passion you gave to your teammates and me in creating an unbelievable family atmosphere. I wish you all good luck as you figure out the next part of your life journey, and want you to know that I will do whatever I can to help you in the future.

“Thank you so much for our time together. I will miss you all, but will be continuing to root for you and am excited to watch who you become both in and out of the water. I appreciate your love, passion, dedication, and hard work. Those are the keys that will allow you to continue to strive and prosper in your futures.”

Fink says that he’s not sure what his next move will be, and is taking some time off to plan his path forward.

Fink has also coached the Tempe Sun Devils Aquatic Club and with the powerhouse Tucson Ford club in prior USA Swimming experience.

Fink followed Brendan Hansen in that position, who resigned as the club’s head coach in 2018, citing “differing opinions as to the direction and operation of (the) team” with owners Patti and Kevin Thompson.”

While there were senior lead coaches between Hansen and Fink, none were designated as head coach.

Both cited similar reasons for leaving, specifically “differing opinions” with the club’s ownership.

Kevin Thompson is the former CEO of SolarWinds, a software company that includes among its clients nearly all of the Fortune 500 companies and a number of federal agencies, from 2010 until 2020. A SolarWinds product was the focus of a massive and large-scale attacks on supply chains including the federal government in 2019 and 2020 that Microsoft called “the largest and most sophisticated attack the world has ever seen.”

The club was rated as a USA Swimming silver medal club in the 2021 Club Excellence rankings.

Among the program’s most noteworthy alumni are US World Junior Championship team member Matthew Willenbring and 2017 U.S. World Championships team member Dakota Luther. The club sent at least 13 athletes to college varsity squads in the class of 2021 alone, including schools like Texas, Ohio State, and Arizona State.