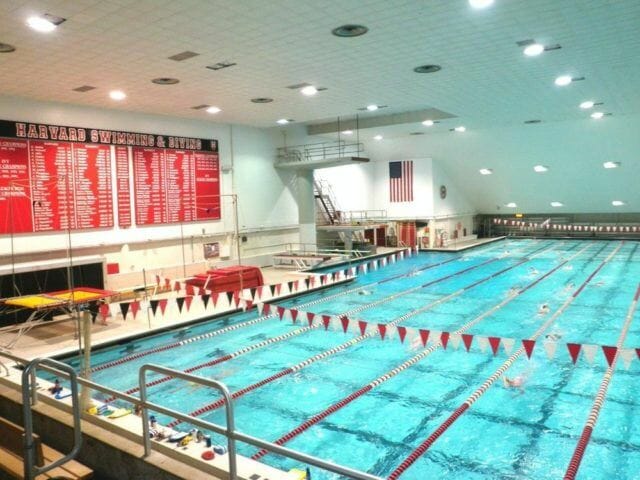 The Harvard women opened their 2021-22 season on Friday in northern New Jersey, taking down Rutgers 170-129. While most programs across the NCAA have been racing for weeks, Ivy League competition rules do not allow programs to have official meets before November 1st, which makes this past weekend the unofficial opening weekend for Ivy League swimming and diving. It also marks the first weekend of meets for any Ivy school since the start of the COVID-19 pandemic after the Ivy League cancelled fall and winter sports last year.

Leading the way for the Crimson was Russian freshman Aleksandra Denisenko, who won all three of her individual events on the day. The St. Petersburg, Russia native started off her meet by winning the 100 breast in dominant fashion in 1:03.82, a second and a half clear of the field. She completed the breaststroke sweep by winning the 200 as well, touching first in 2:20.32, nearly two seconds ahead of teammate Mikki Thompson. In her final individual event of the day, Denisenko used a quick opening 100 to win the 200 IM in 2:04.81, touching just ahead of teammate Erin Cavanaugh. Denisenko has also competed for her home country internationally, having swum in the 2019 World University Games in the 200 and 400 IM and the 4×200 free relay.

Also winning multiple individual events for the Crimson was Denisenko’s freshman classmate Abby Carr. The Germantown, Maryland native started off her meet by winning the 200 fly in 2:01.46, touching just ahead of NCAA-qualifying teammate Felicia Pasadyn. Carr later returned to win the 100 fly by almost a full second in 55.59.

Rutgers was led by a pair of dual event winners in senior Alice Scarabelli and junior Sofia Chichaikina. Scarabelli, a native of Milan, Italy started her day by winning the 100 back by leading wire-to-wire to win by nearly a full second in 54.71. She returned a few events later to win the 100 free in 50.51. Both of those swims stand as season bests for the Italian.

Rutgers’ other double winner was junior Sofia Chichaikina. The Togliatty, Russia native’s first victory came in the 200 free, where she used a quick final 50 to pull away from the field and touch first in 1:50.17. Chichaikina returned to the blocks just a few events later to win the 50 free as well, outtouching Harvard freshman Mandry Brenner 23.54 to 23.64. Both swims marked season bests for Chichaikina, who is the current Rutgers school record holder in the 100 and 200 free.

Rutgers’ diving program was also impressive, with 1-2 finishes on both boards. Fifth-year Abigail Knapton won the 3 meter with a score of 339.90 along with the 1 meter, where she won with a 313.13. Rutgers junior Savana Trueb was the runner-up in both events.

Harvard returns to the pool on Saturday for a tri-meet with Cornell and Dartmouth in Ithaca, New York, while Rutgers will welcome another Ivy League foe, defending Ivy champions Princeton, to Piscataway this Saturday.