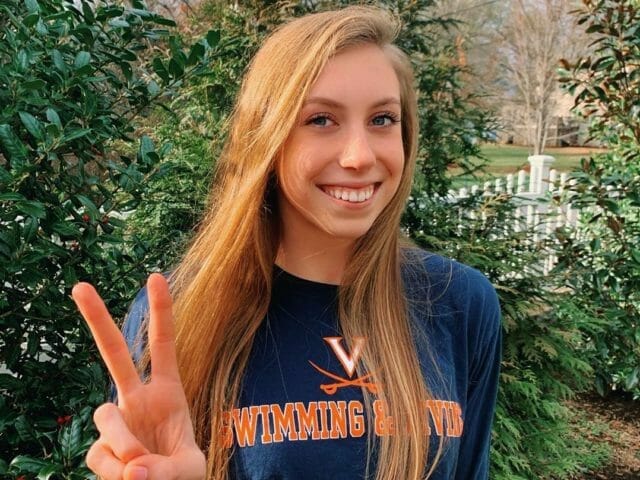 Army West Points headed down the East Coast to take on the Virginia Cavaliers in Charlottesville this morning. The Cavalier women, who are the reigning NCAA champions and whom we ranked at the top of our first round of power rankings for this season, defeated Army 181-89. The UVA men (Power Rankings: #9), defeated Army 186-94.

The Cavalier women got strong performances by their top stars, with four women winning two events each, while much of the roster switched up their normal event lineups a bit.

Freshmen Gretchen Walsh only technically won one event, the 200 free, in which she touched first by nearly a second over classmate Ella Bathurst, 1:47.00 to 1:48.92. Walsh officially exhibitioned her other event, the 100 fly, but she also touched first there. Her time of 52.18 was just about a half second shy of her lifetime best of 51.73. It was, however, just enough to clip the UVA pool record of 52.19, which had previously been held by Gretchen’s older sister, Alex Walsh.

That was the first of three breaststroke swims for Douglass, who swept the individual breaststroke events with times of 59.98 and 2:07.68. Last season, Douglass continually rocked some fast in-season 200 breasts, before ultimately swimming the 100 free at NCAAs, taking 2nd.

Freshman diver Lizzy Kaye also won two individual events, as she swept the diving portion of the meet with a score of 288.98 in the 3m and 285.45 in the 1m.

The UVA men were missing their two biggest sprinters in Matt Brownstead and Matt King, and swam “off” events to an even greater extent than did the women’s team, but still beat Army 186-94, with no exhibitioned swims impacting the score.

CHARLOTTESVILLE, Va. – The Army West Point swimming & diving team turned in some of its best performances of the season during its meet at Virginia on Saturday morning, though the Black Knights ultimately dropped results on both the men’s and women’s sides to the Cavaliers.

Army’s men’s team fell 186-94 to a Virginia program that finished eighth in the country last year, while the women lost 181-89 to the reigning national champions.

The team certainly rose to the challenge, as numerous cadet-athletes earned top-three finishes in the meet. Evan Zhang highlighted the competition for both sides, as he picked up a pair of individual victories.

The Men’s Meet
Army was competitive out of the gate, un-deterred by the level of competition in Charlottesville. In just the second event of the meet, Kevin Lin swam his way to a first-place finish in the 200 Free and was joined on the podium by Sean Dwyer, who finished third.

Two races later, Evan Zhang topped the field in the 100 Breast for his first victory of the day. Though the Cavaliers were able to grab the top spots in the following event, Owen Harlow added a boost in the 50 Free when he out-touched a Virginia swimmer by 0.03 seconds to take third overall.

Once again, Virginia responded with an additional handful of wins before Evan Zhang added his second triumph of the day, this time in the 200 Breast. Zhang bested the field by almost 10 full seconds in one of his most dominant performances as a Black Knight.

Ian Tansill kept up the momentum following Zhang’s thrilling win, as he swam to a first-place finish in the 500 Free. Tansill was one of three Cadets to score in the event, joined by George Glover and Sean Dwyer, who finished fourth and fifth, respectively.

On the boards, Army was led by the tandem of Daniel Alaimo and David Manelis. Alaimo captured the 3M event and finished second on the lower board, while Manelis placed third on the 3M board and fourth in the 1M event.

Though the Cavaliers controlled the scoring down the stretch, the Black Knights were still able to keep them honest with some tightly-contested races. Lin had a notable performance in the 400 IM, finishing less than a second off of the winning time.

Despite the top finishes earned by Army throughout the day, Virginia’s depth proved to be the difference.

The Women’s Meet
The women’s team got off to a slower start than the men’s side, as Virginia opened up the action by grabbing a majority of the available points. Eventually, Aurelie Migault became the first individual Black Knight to record a top-three finish when she placed third in the 100 Breast and her effort was matched in the following event by Melinda Zhang, as she finished third in the 200 Fly.

Virginia went on to post the top finishes in the next few events before Hannah Percher snapped the scoring spree with a third-place swim in the 200 Back. She out-swam a Cavalier by nearly two full seconds to earn three points.

Percher later went on to add another top finish in the 500 Free, swimming to a second-place finish just ahead of teammate Erica Esterly, who placed third.

Once again, the Black Knights were led by Minh Donnell on the boards, as she finished fourth in the 3M and 1M events. Both Acacia Chai (1M) and Abigail Gibbs (3M) added one sixth-place finish apiece to add points to the Cadets’ total.

The Cavaliers only had exhibition entries in the final events of the meet, which allowed Army to pick up some first-place finishes. Melinda Zhang (100 Fly), Meghan Cole (100 IM) and a Black Knight quartet (200 Free Relay) picked up key points as the racing wound down to push the score to its final margin.

Cadets’ Corner
“This meet was exactly the type of meet our program needed to have. If we want to get to a higher level, we need to compete at a higher level and we did just that. Speaking only for the men, UVA’s team is a top-10 program so going into the meet, we were very excited to have the opportunity to learn from and race with some of the best swimmers in the country. I am extremely proud of how our men stepped up to compete and race today and I’m excited to see what we can do at the NC State Invite.” – Evan Zhang

“I am super proud of how the team showed up for this meet. The divers crushed it on the first day after a long bus ride and the rest of the team swam their hearts out on day two. This meet was such a special opportunity for us to race against the best in the nation and we’re going to  walk away from this meet having learned a lot. I am excited for the NC State Invite and Navy later on in December.” – Lauren Carag

Coach’s Corner
“I am really impressed with the way that we competed today. We’ve talked a lot this year about what it means to be competitive and how, in order to progress, you have to be comfortable with the idea of being uncomfortable. Today was just that for us. I felt that all of our athletes rose to the challenge and competed to the best of their abilities, regardless of what the competition was doing. This program has some exciting goals for both this season and the future, but in order to achieve those goals we have to push ourselves. Today was a great benchmark to check where we are at in achieving those goals and both myself and our staff is pleased with what we saw. Our schedule only gets more difficult from here and I’m looking forward to seeing how our team continues to attack challenges head-on.” – Head Swimming & Diving Coach, Brandt Nigro

What’s Next
Army will enjoy a few weeks off from racing, which the team will use to prepare for its mid-season meet at the NC State Invite. The Black Knights will take on some of the top teams in the country Nov. 18-20 at the Greensboro Aquatic Center in Greensboro, N.C.

CHARLOTTESVILLE, Va. – The Virginia men’s and women’s swimming and diving teams defeated Army in a dual meet on Saturday morning at the Aquatic and Fitness Center.

“I was really impressed. We had a hard day of practice yesterday and we wanted to challenge them back-to-back days. We had a lot of people step up in events they don’t typically swim, which was really nice. We wanted to show off their versatility and see what they are capable of. I think it is a good steppingstone into next weekend (against Texas), which will be a big competition for us.

“It makes a world of difference to have the crowd there. It makes the student-athletes happy and it’s good to have a lot of noise before you step up on the blocks.”

Virginia’s women picked up 12 first place finishes in the win.
The Cavaliers opened the dual with a win in the 200-yard medley relay as Alex Walsh, Emma Weyant, Abby Harter and Reilly Tiltmann, respectively, combined for a time of 1:41.95.
UVA took the top three spots in five events: 200 free, 100 back, 50 free, 100 free and 200 breast.
Alex Walsh and Kate Douglass both had two individual event wins on the morning. Walsh won the sprint freestyle events (50 and 100 free) and Douglass swept the breaststroke events.
Gretchen Walsh (200 free), Lexi Cuomo (100 back), Harter (200 fly), Weyant (200 back) and Ella Collins (500 free) each won individual events.
Ella Bathurst had a pair of second place finishes in the 200-yard freestyle and 200-yard breaststroke.
Gretchen Walsh swam a UVA pool record time of 52.18 in the 100-yard butterfly.

Lizzy Kaye swept the women’s 3-meter and 1-meter diving events. Kaye scored a 288.98 on the 3-meter and a 285.45 on the 1-meter.
UVA’s women took the top three spots in both events. Charlotte Bowen was second on both and Maddy Grosz took third in both events.
Oliver Mills won the 1-meter event with a score of 304.95 on the men’s side.

Virginia hosts Texas in a two-day dual meet on Friday November 5 and Saturday, November 6. The meet will be streamed on ACCNX.