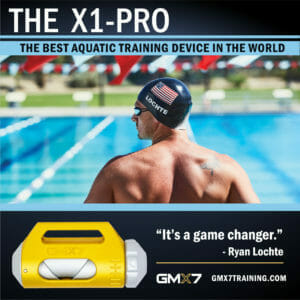 In our GMX7 Weekly Wonders of Age Group Swimming series, we celebrate swimmers of every age and experience level with age group profiles of some recent results.

Blake Amlicke, 15, Nashville Aquatic Club (SE-NAC): Amlicke put up the fastest time in the men’s 200 backstroke at the 2021 SE October Open, with the 15-year-old clocking 1:51.95 to shatter his previous best of 1:58.33 set in January. Despite the drastic drop in yards, a performance of this nature could’ve been seen coming given Amlicke’s 2:10.69 long course swim in July at the Southeastern LC Championships.

Lucy Velte, 12, Ad Astra Area Aquatics (MV-AAAA): The 12-year-old Velte put up eight personal best times at the Ad Astra Area Aquatics Senior Circuit meet, highlighted by her 57.97 swim in the 100 backstroke. That time breaks her into the top 100 in girls’ 11-12 age group history, ranking 97th (notably one spot ahead of Kate Douglass), and marked a PB by almost three seconds (old best was 1:00.74).

Aliana Marakovic, 14, Nitro Swimming (ST-NTRO): Marakovic went five-for-five in lifetime bests at the Longhorn Aquatics 11 & Over Fall Kick-Off at the beginning of October, including a four-second best in the 500 free. Marakovic touched in a time of 4:56.33, marking her first time under 5:00 and leading the field by nearly 10 seconds.

Kate Hotem, 14, NOVA of Virginia Aquatics, Inc. (VA-NOVA): Hotem also had a perfect meet in terms of best times at the 757swim IMR/IMX Season Kickoff Meet in Virginia, with the highlight being her 200 back performance. Hotem dropped a time of 2:00.93, slicing 1.7 seconds off her previous PB of 2:02.66 set in March.

Founded in 2018, GMX7 is based in St. Petersburg, Florida and is dedicated to changing the world of swimming by empowering competitive swimmers with the best aquatic resistance training devices ever created. GMX7 was founded by David McCagg, a 7-time gold medalist, former world record holder and winner of multiple national championships. The first device on the market by GMX7 is the X1-PRO. Designed by ROBRADY Engineering, it has already been the recipient of several awards including the 2020 International Design Excellence Award and the 2020 Red Dot Award for product design.

GMX7 is a SwimSwam partner.