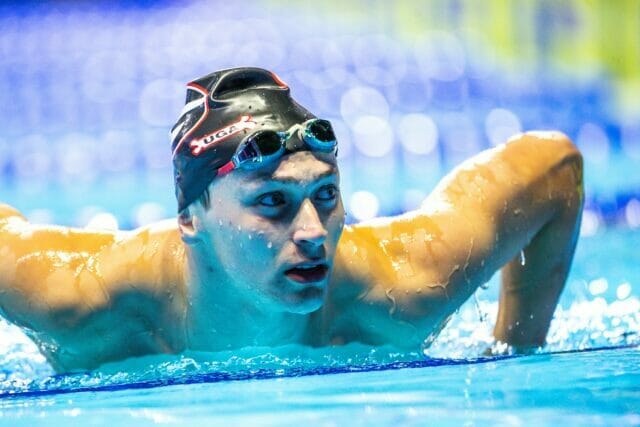 ATHENS, Ga. – Following a historic 2020-21 campaign, the University of Georgia swimming and diving team returns to the water this weekend as it hosts North Carolina and South Carolina in a dual meet doubleheader at Gabrielsen Natatorium.

Georgia hosts North Carolina on Friday, Oct. 22 at 2 p.m. EDT, followed by a matchup with South Carolina on Saturday, Oct. 23 at 11 a.m. EDT. Both meets are open to the public and will be aired on SEC Network+. Live results are available on GeorgiaDogs.com and to paid subscribers on the MeetMobile app. Spectators attending the meets are strongly encouraged to wear masks, in accordance with the policies of the University System of Georgia.

Tom Cousins Swimming & Diving Head Coach Jack Bauerle returns for his 43rd season as the women’s coach and 39th season in command of the men’s squad. At 43 seasons, he is now the longest-tenured head coach in SEC history, surpassing former LSU gymnastics coach D-D Breaux. With 586 career wins, Bauerle is also the winningest active NCAA coach and the second-winningest coach in DI history. This past summer, he served as a member of the United States coaching staff in Tokyo, with his athletes winning nine medals for Team USA.

On the women’s side, six All-Americans return from last season’s team that finished third at SECs and eighth at NCAAs. Junior Zoie Hartman placed second in the 200 IM at NCAAs, following up a four-gold medal-winning performance at SECs. Senior Dakota Luther returns after finishing third in the 200 butterfly at NCAAs and setting a new school-record time in winning a second-consecutive SEC title. Sophomore Maxine Parker will also look to build upon seven All-America citations in her rookie campaign.

Georgia’s returnees are joined by 32 newcomers to produce one of the largest rosters in program history. Eight incoming freshmen competed at June’s U.S. Olympic Trials, while freshman Duné Coetzee competed for South Africa at the Tokyo Olympics and helped her 4x200m freestyle relay team set an Africa record time. In recent weeks, Bulldog rookies garnered further honors as Reese Branzell competed for the Team USA at the FINA Swimming World Cup and Abby McCulloh was named to the USA Swimming Junior National Team.

As for this weekend’s opponents, North Carolina, led by third-year head coach Mark Gangloff, is in the midst of a program resurgence. Last season, the Tar Heels earned 16 All-America citations as the women finished 12th at NCAAs and the men finished 24th. UNC is particularly talented at the diving well as both Anton Down-Jenkins and Aranza Vazquez won Most Valuable Diver awards at the ACC Championships before representing their countries at the 2020 Tokyo Olympics. In the all-time series between Georgia and North Carolina, the Bulldogs lead 23-12 in men’s and 26-1 in women’s, with the last meeting coming on Oct. 25, 2019, in Chapel Hill.

South Carolina is now under the direction of Georgia alum Jeff Poppell, who joined the Gamecocks after three seasons as Florida’s women’s coach. The Gamecocks are looking to improve upon last year’s SEC Championship finishes of 10th (men) and 11th (women) respectively. In the all-time series, Georgia leads 32-17 in men and 31-3 in women. The border rivals faced off twice last season in a home-and-home series, with the Bulldogs sweeping both meets.

Following this weekend, Georgia remains on the road for the rest of the fall slate, traveling to Florida and Auburn in consecutive weeks before heading to Atlanta for the Georgia Tech Invitational. The Bulldogs will return home in January for a trio of dual meets against Alabama, Tennessee, and Emory. The SEC Championships will return to a coed format this season and will be held on Feb. 16-20 in Knoxville, with NCAA Championships following in March at Georgia Tech.