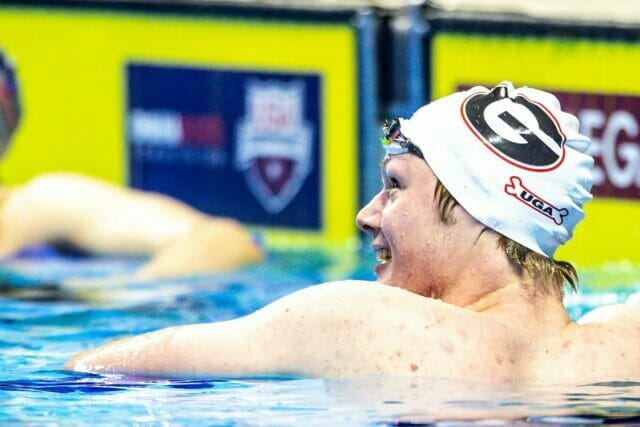 ATHENS, Ga. – Following a hard-fought meet at Florida, the eighth-ranked University of Georgia swimming and diving team remains on the road for a matchup with longtime rival Auburn (No. 23 in CSCAA women’s rankings) Friday at the James E. Martin Aquatics Center in Auburn, Alabama.

The meet opens with the first round of diving approximately at 11:15 a.m. EDT, with the full competition getting started at noon. Friday’s meet will be streamed live on SEC Network+ with live results available on GeorgiaDogs.com and to paid subscribers on the MeetMobile app.

In the all-time series, the Georgia women lead by a 15-3 margin, while in the men’s series, Georgia holds a 21-14 advantage. Last season, the Bulldogs swept the Tigers at Gabrielsen Natatorium, with the men winning 177-118 and the women prevailing 173-125.

Georgia enters the meet after being swept last Friday at Florida, with the women dropping a tight 153-147 decision and the men falling, 180-120. In the men’s meet, sophomore Luca Urlando earned SEC Men’s Swimmer of the Week honors for the second-consecutive week as he won the 100 butterfly, 200 butterfly, and 200 IM with the nation’s fastest time in each event. Fellow sophomore Jake Magahey also moved into first place nationally with victories in the 500 and 1,000 freestyle. Junior Ian Grum earned the Bulldogs’ other win as he led a sweep in the 200 backstroke.

In the women’s meet, the Bulldogs posted a strong swimming performance, led by junior Zoie Hartman, who won four races and earned SEC Women’s Swimmer of the Week accolades. Hartman swept the breaststroke events and 200 IM with B-cut times, along with a win in the 200 medley relay. Senior Dakota Luther swept the butterfly events, while freshman Abby McCulloh earned SEC Women’s Freshman of the Week with the fourth-fastest time nationally in the 500 freestyle.

Auburn is currently in the first season of head coach Ryan Wochomurka’s tenure, having already competed against Florida State, Kentucky, and NC State. Wochomurka was a 21-time All-American for the Tigers and a member of three national championship teams before serving as Houston’s head coach for the past six seasons.