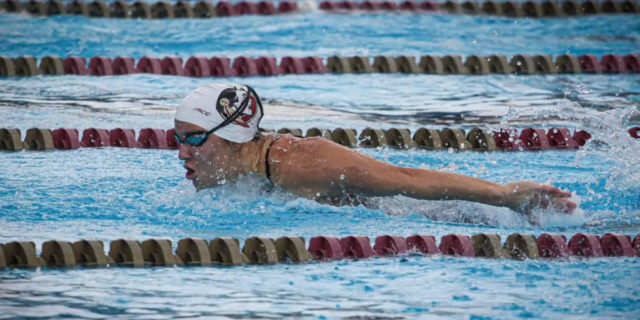 Over the weekend, Florida State played host to a trio of in-state opponents including the women from West Florida and North Florida and both men and women from Florida Southern. The meet was also a fundraiser to support breast cancer treatment, with the team partnering with the Tallahassee Memorial Hospital to sell shirts in support of the TMH Walker Breast Center.

The Seminole women were dominant against their three opponents, winning by an average of nearly 200 points and claiming the win in nearly every event.

FSU’s A team of Tania Quaflieri, Maddy Huggins, Aryanna Fernandes, and Gloria Muzito combined for the top time of the meet in the 200 medley relay. The quartet finished in 1:42.92. The school also closed out the meet with a relay win, claiming the top spot in the 200 free relay in a time of 1:36.09.

Picking up the win in the 1000 free was a freshman from Florida Southern, Olivia Miles. Miles broke up FSU’s dominance with a huge win in the event, leading Maggie Emary of FSU by nearly four seconds. Miles’ finished in 10:26.77. She later finished 5th in the 500 free (5:12.42), with FSU’s Phoebe Griffiths winning in 4:59.23.

Early in the meet, FSU swept the podium in two events, with the Seminole women claiming the top three spots in both the 200 free and 100 breast. In the 200 free, it was Nina Kucheran, Ashely Zettle, and Tania Quaglieri who earned the top-3 spots. Leading the field was Kucheran in a time of 1:52.35, while Zettle was just behind her in 1:52.97. Kucheran was the silver medalist in the 100 breast at the 2019 ACC Championships. FSU also picked up a win later in the meet in the 200 breast, with Katherine Baker finishing in 2:23.51.

The 100 back saw both Western Florida and North Florida make their way onto the podium, although it was still Florida State that came away with the first-place finish. While Jaden Herbet claimed the top spot in the race in 57.24, she was followed by UWF’s Ester Rizzetto (57.65) and UNF’s Taylor Warren (59.41). Rizzetto would later pick up a first-place finish in the 100 free with a time of 51.47, while Herbet also grabbed a second win in the 200 back (2:05.29).

In their second sweep of the meet, Maddy Huggins led the Seminoles with a first place, followed by Hannah Womer and Nora Woods. Huggins, a freshman on the team, finished in 1:03.04 to pick up the first win of her collegiate career. In winning the event, she beat out Womer, a senior who finished 27th in the 100 breast at the 2021 ACC Championships. Womer wasn’t far off of her time from that meet, stopping the clock in 1:03.37.

While the FSU women were dominant in the pool, they were just as strong on the boards, with the Seminoles taking the top three spots on both the 1-meter and 3-meter boards. On the 1-meter, it was Samantha Vear who came away with the top score in close competition with Victoria Cervantes Milan. Vear narrowly pulled off the win, scoring 284.18 to Milan’s 280.65. On the 3-meter, Milan was able to come away with the top score in the field finishing with 314.70.

Gloria Muzito, a freshman at Florida State, claimed the top spot in the 50 free in 24.08. The Seminoles finished with the top-4 times in the race.

The final individual event of the meet went to Florida State junior Syd VanOvermeiren, who took the top spot in the 400 IM. She finished in 4:24.81.

With only two men’s teams competing at the meet, the Seminoles came away with a huge win over Florida Southern.

The Seminoles started the meet with the top four times in the 200 medley relay, with their A relay finishing in 1:29.89.

Breaking up FSU’s winning streak was Brandon Dyck in the 100 back. The Florida Southern senior touched in 50.54, just ahead of Arijus Pavlidi (50.60). Later in the meet Pavlidi would pick up his own win, with the freshman taking first in the 200 back in 1:50.16.

After diving, Adrian Aguilar claimed the top spot in the 100 free. The junior at Florida State was the only swimmer to dip below 46.0, touching in 45.84. He was followed by Eli Butters, a freshman with the Seminoles, who touched in 46.99.

Mason Herbet claimed the top spot in the 100 fly by nearly a second over fellow Seminole Peter Varjasi. Herbet finished in 48.56. Nick Mason picked up the final individual win of the meet, touching in 4:00.23 in the 400 IM.