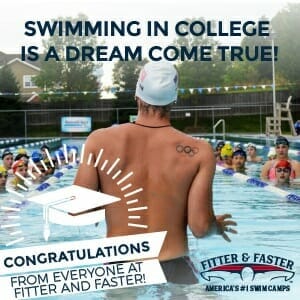 By Madeleine Lepesant on SwimSwam

The Florida Gators have snagged a verbal commitment from Julia Podkoscielny for their class of 2027. She is a year-round swimmer at Pine Crest Swim Club and she is a junior at the Pinecrest School. She will make her way from Fort Lauderdale to the northern part of Florida in the fall of 2023.

I chose U of Florida for its outstanding education and swimming. I love the team, coaches and their philosophy. Can’t wait to be on campus and fully experience being a Gator.

Podkoscielny was ranked #9 on SwimSwam’s Way Too Early Recruit Ranks for the class of 2023. As an 8th grader, she was already one of Florida’s top high school swimmers. She began competing for her school in 7th grade and made significant improvements before getting to high school. In 2017, she finished 7th in the women’s 100 back (57.72) and 9th in the 200 IM (2:06.65) at the Florida 1A State Championships. She went 10 seconds faster than the previous year in the 200 IM and was 3 seconds faster in the 100 back.

She jumped higher in the rankings the following year. As a freshman in high school, Podkoscielny brought home two individual titles and two relays wins at the 2019 Florida 2A State Championships. She dominated the 100 back, touching a second ahead of the silver medalist in a time of 54.76. She also left the competition behind her in the 200 IM. Her time of 2:00.46 placed her 1.5 seconds ahead of the field.

Her real breakout came in the fall of 2020, when Florida swimming resumed after the pandemic. After months of not racing, Pine Crest hosted an intrasquad meet where Podkoscielny broke a nine-year-old LSC record in the 200 yard back, previously owned by Tasija Karosas. She placed first in the four events she swam. Her 1:55.39 in the back lowered the benchmark by 0.94 seconds and moved her up to 62nd all-time American in the 15-16 age group.

Below is a table of Podkoscielny’s top SCY and LCM times.

Podkoscielny is the daughter of two successful Polish swimmers. Her father and Pine Crest head coach, Mariusz, moved to the US to attend the University of Arizona. He represented Poland at the 1988 and 1992 Summer Olympic games. At the 1988 Olympics, Podkoscielny finished 5th in both the 400m and 1500m free. He set an Olympic Record during the prelims heats of the 400 free, but it was later broken in finals by East Germany’s Uwe Dassler.

Anthony Nesty recently took over as the Head Coach for the Women’s Swimming and Diving Team. After the 2020 Tokyo Olympics, Katie Ledecky announced that she would be moving to Florida to train under Nesty.

Florida finished second behind Kentucky at the 2021 SEC Championships. Podkoscielny’s top times would have placed her in the B-final of the women’s 400 IM and 200 back, and the C-final of the 100 back, 200 IM, and 500 free. Last season, she would have been the team’s third-fastest IMer behind Vanessa Pearl and Golding, and she would have posted the top time in the 200 back.

Melissa Cowen of New Zealand has already sent in her verbal commitment to swim for the Gators’ class of 2027. Cowen is the New Zealand National Record holder in the 200 SCM breast. Podkoscielny will join her in the fall of 2023 as a newcomer on the Gainesville campus.