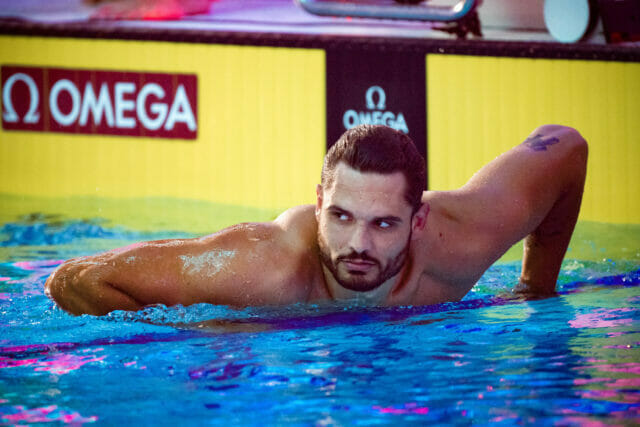 Frenchman Florent Manaudou has changed his training ahead of the Paris 2024 Olympic Games, according to French journalist and SwimSwam contributor Lahontan Laurent.

Of his former coach Julien Jacquier, Manaudou said “Julien is the coach who made the best programs for me. I told him that personally we don’t really have chemistry. I thanked him, he helped me tremendously. But I really need to be close to my coach.”

In Antibes, he will train under the dual coaching of Quentin Coton and Yoris Grandjean.

“What I liked was that the two are people who are going to have ideas, who are young. They will listen. We’ll (have an exchange). The fact that they’re friends is the only challenge. Because working with friends is good, but I don’t want to be let to do whatever I want. I told them that.”

Both Coton and Grandjean are former international-level swimmers. Coton, who is the same age as Manaudou (30), was the French Champion in the 400 IM in 2012 and 2014 and in the 200 breaststroke in 2017. Grandjean, a Belgian, is 32. He won 2 gold and 1 silver medal at the inaugural 2006 FINA World Youth Championships as a sprinter, and later won a pair of European SC Championships bronze medal on Belgian 200 free relays.

CN Antibes is home to two 50 meter outdoor pools, an indoor 25 meter pool, and an indoor teaching pool. The club, which has existed since 1965, has been voted the best training club in France on several occasions and has won more than 200 French Championships. It’s the only club since 1976 to have put a swimmer on each French Olympic Team.

That includes among its long history World Record holder Alain Bernard, now retired. Among the club’s current trainees is Tokyo Olympian Fantine Lesaffre, a 400 IMer who is the French Record holder in the 400 IM in long course, as well as the 200 and 400 IMs in short course.

The training group at Antibes won’t be as good as Manaudou is leaving behind in Marseille. The club’s highest-ranked males in the 50 free, Manaudous’s best event, last season were 17-year old Matteo Robba (23.39 – 44th) and 28-year old Julien-Pierre Goyetche (23.52 – 48th).

The move across the Mediterranean coast, about 2 hours west, also moves him further away from the restaurant La Piscine that he opened in Marseille with Georgiana Viou in 2016.

The 30-year old Manaudou won the Olympic gold medal in the 50 free at the 2012 Olympics and the Olympic silver medal in both the 50 free and the 400 free relay at the 2016 Olympics. After a hiatus to pursue a career as a professional handball player, Manaudou returned to swimming, where he trained with and competed for Energy Standard Club. He became a force in the new International Swimming League after his return, and repeated his silver medal performance in Tokyo over the summer.

Manaudou recently got engaged to Danish swimmer Pernille Blume, who was the 2016 Olympic gold medalist in the 50 free. While she has not made any announcement, if she continues training toward Paris as well, it is likely that she will train with Antibes as well.

While Blume has not raced since the Olympic Games (she is currently one of the leading contenders to win the Danish version of Dancing With the Stars), Manaudou raced in the last two regular-season meets of the ISL season for Energy Standard. In the last of those meets, in late September, he finished 4th in the 50 free (21.26) and 6th in the 50 fly (22.99) in short course meters.