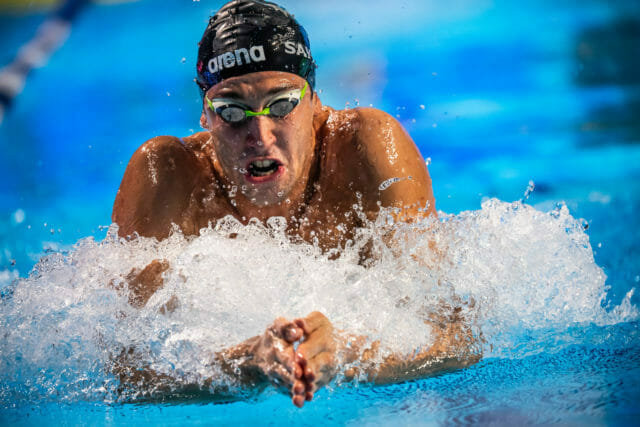 Competing in the morning heats of the mixed 4x50m medley at these European Short Course Championships, Sakci scored a massive breaststroke leg of 25.02 while Shymanovich was just slightly slower in 25.12.

Both outings overtake the previously-recorded fastest men’s relay split of all-time according to the database entering this competition, a mark which stands at the 25.20 Shymanovich put up at the 2018 FINA World Short Course Championships. The only other man in this morning’s heats that went sub-26 was Russia’s Kirill Strelnikov whose split hit 25.83.

Just days ago, however, Italy’s Nicolo Martinenghi crushed a men’s medley relay split of 25.14, so even that was already faster than the one on record from Shymanovich 3 years ago.

The Belarusian relay will move onto the final happening tonight, ultimately checking in at 3rd place in 1:39.36. However, 23-year-old Sakci’s Turkish squad placed 11th.

Entering this meet, Sakci’s fastest relay split was represented by the 25.40 he produced at this same meet two years ago. There in Glasgow, Shymanovich’s final split was 25.46 on the men’s relay which won bronze while he was 25.44 on the 4th place finishing mixed relay.

Shymanovich already grabbed the 100m breaststroke silver earlier at these championships while Sakci is still hunting his first piece of individual hardware. Both men will have the chance to land atop the podium tonight as they’ll be battling it out in the 50m breaststroke final.