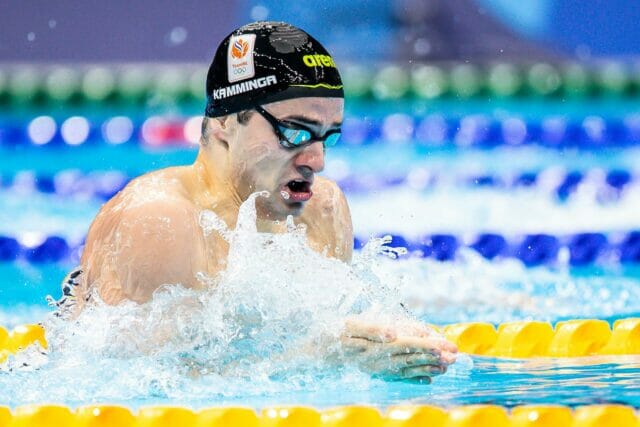 It was a light opening session at the third stop of the 2021 FINA World Cup circuit in Doha, with only five preliminary events on the docket before we’ll see 12 contested at finals.

Dutch swimmers nabbed the top seed in three of the five events that went down, highlighted by Arno Kamminga‘s 57.04 showing in the men’s 100 breaststroke.

Germany’s Fabian Schwingenschlogl qualified second out of the heats in 57.82, .01 ahead of Russia’s Anton Chupkov. Chupkov opted to race here after previously declaring his intention to retire.

The Dutch swimmers also claimed the top seeds in the 50 freestyle events, with Ranomi Kromowidjojo (23.86) pacing the women and Jesse Puts (21.15) leading the men.

Australia’s Emma McKeon and Kyle Chalmers have won both 50 free events through the first two legs of the World Cup, and currently rank second in the women’s and men’s events with times of 24.09 and 21.26, respectively.

South African teenage sensation Matt Sates easily advanced through to the final in the men’s 100 IM (53.22) and 100 fly (52.51) in the prelims, ranking first and fifth, respectively.

Portugal’s Fernando Souza da Silva (51.27) was the top qualifier in the 100 fly, while American Tom Shields (52.44) cruised through in fourth.