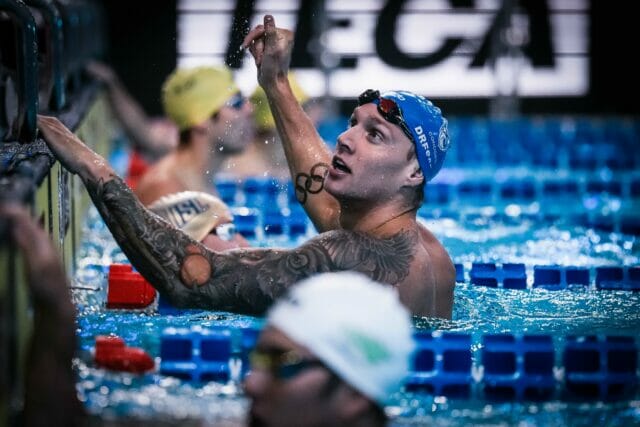 Two of the sport’s biggest stars will be absent from the opening match of the International Swimming League (ISL) playoffs on Thursday, as both Caeleb Dressel and Chad Le Clos aren’t entered to compete.

Dressel, the two-time reigning ISL Season MVP and the top scorer (points-per-match) in the regular season, won’t be in action for the defending league champion Cali Condors.

Dressel missed the club’s final regular season match, opting to head home and rest up after the club had clinched a playoff spot back in September. The 25-year-old American left as the season points leader, having scored 233 points in just five days of racing.

Dressel won 11 events during the regular season, including the freestyle skins in Match 4, and Cali’s chances of ultimately defending the league title in December rest largely on his shoulders.

Le Clos, a top contributor to the 2019 champions Energy Standard, pulled out of the FINA World Cup stop in Budapest in early October with an injury, and is one of many swimmers for the club that are absent for the opening match.

Energy Standard only has 12 men and 12 women slated to compete in Match 1, reportedly due to sickness and injury. With 114 event slots to fill, swimmers will have to race an average of 4.75 events for the club.

This has resulted in some off-event entries, such as Siobhan Haughey being entered in the women’s 50 breaststroke with the absence of Italian Benedetta Pilato.

Sherridon Dressel joins brother Caeleb in being out for Cali. Dressel won the women’s 50 and 100 backstroke during Match 2.
Hali Flickinger, who missed the regular season but was on the club’s playoff roster, is not entered as well. Flickinger ranked 13th in Season 2 MVP scoring.
Oleg Kostin, one of the club’s top men’s 50 breast options, is out.

Felipe Franca Silva, who won the men’s 50 breast in Match 5, is out for DC.
Versatile IMers Jay Litherland and Zsuzsanna Jakabos are both out for the Trident. Jakabos won the women’s 200 fly in Match 9.

Marco Orsi, who is coming off of competing at the SC European Championships, is out for Iron. Orsi won the men’s 100 IM four times during the regular season, including at the do-or-die Play-In Match.
Also absent for Iron will be women’s freestyler Veronika Andrusenko and backstroker Silvia Scalia.

In addition to Le Clos and Pilato, Energy Standard will also be without another star female breaststroker in Evgeniia Chikunova, who won the women’s 200 breast all four times she raced it during the season.
As annoucned on Wednesday, Florent Manaudou is out for the club, as is Max Stupin, Simonas Bilis and Fanny Teijonsalo.