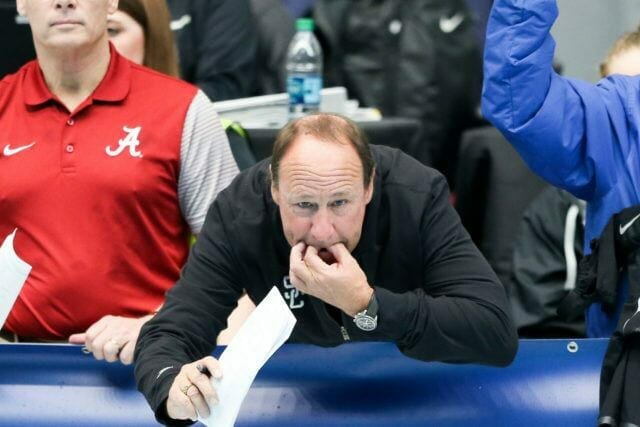 In addition to announcing a 28-swimmer roster for the 2021 Short Course World Championships, the United States has also announced a 5 person coaching staff that will make the trip to Abu Dhabi for the meet that runs from December 16-21.

That provides a valuable opportunity for up-and-coming coaches, though, who might be the next generation of long course World Championship or Olympic coaches.

There is 1 female, Virginia associate head coach Blaire Bachman, among the staff of 5.

The staff, much like the roster, has shrunk since 2018. In 2018, there were 6 coaches at the meet, including separate head coaches for the men’s and women’s teams.

He is currently the head coach of the Tokyo Frog Kings of the ISL, and has served on international staffs for a number of other countries as well.

Much of the staff, however, is green as international coaches. These are the biggest international appointments for Collins and Bachman. Quevedo has competed at the Olympics and Pan American Games and has served on a number of other countries’ international staffs, though this is his biggest U.S. staff so far.

Ron Aitken, head coach of the US Short Course World Championships, and Cory Chitwood, an assistant at Indiana, will accompany the roster of 8 open water swimmers for the Marathon Swim World Series 10K stop that will be held in conjunction with the pool swimming meet.

The open water and pool teams will travel together to the UAE.