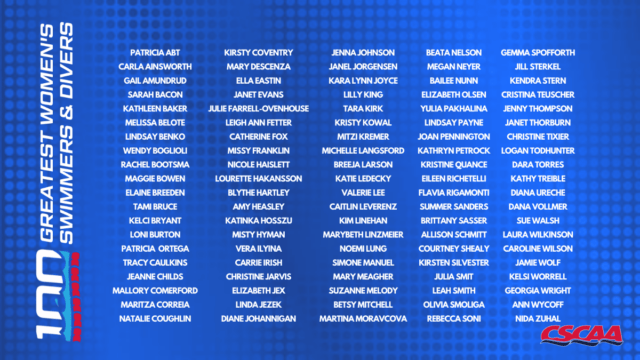 A total of 642 titles. That is the number of individual NCAA and NAIA championships won by members of the College Swimming & Diving Coaches Association’s (CSCAA) 100 Greatest Swimmers & Divers of the past century. The selections were made as a part of the CSCAA’s 100th year celebration.

Nearly three thousand athletes were nominated, with blue-ribbon panel of current and former college swimmers, coaches, and members of the media making selections from a list of 973 finalists. Eighty-seven swimmers and thirteen divers were selected. They hail from twenty-eight states and thirteen countries. Highlights of the selections include 12 members of the International Swimming Hall of Fame and 59 Olympians.

Founded in 1922, the College Swimming and Diving Coaches Association of America (CSCAA), is the nation’s first organization of college coaches. The mission of the CSCAA is to advance the sport of swimming and diving with coaches at the epicenter of leadership, advocacy, and professional development.

The CSCAA’s 100th birthday celebration will continue with upcoming announcements recognizing Centennial MVP’s for each team along with a listing of the 100 Greatest Coaches, 100 Alumni of Impact. The anniversary will culminate with the Association’s convention and awards banquet, May 2-4, 2022 in Rosemont, Illinois.

The CSCAA100 list of Greatest College Swimmers and Divers is listed below in alphabetical order. For profiles on each selection visit www.cscaa.org/cscaa100.