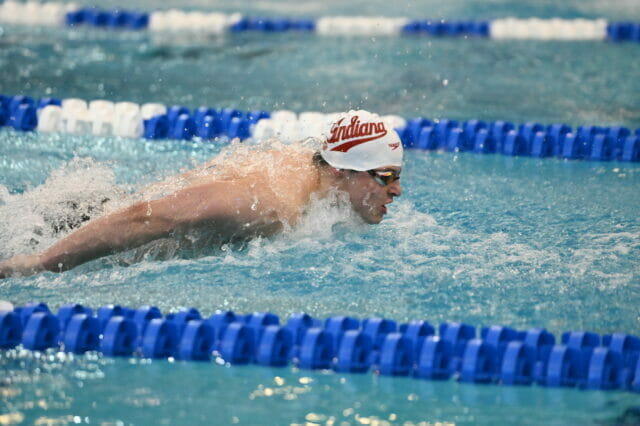 After a one-year hiatus due to the uncertainty surrounding the 2020-2021 season, our college previews are back! We’ll be previewing the 2021-2022 seasons for the top 12 men’s and women’s programs from the 2021 NCAA Division I Championships – stay tuned to our College Swimming Previews channel to catch all 24.

IU is coming off a successful 2020-2021 season, despite a major obstacle late in the season. Then-senior Bruno Blaskovic, the Hoosiers’ leading sprinter, had to leave the pool in January after fracturing his spine. That left Indiana without their potential Big Ten champion 50 and 100 freestyler, and arguably their most valuable relay piece. Without Blaskovic, Indiana took 2nd at the Big Ten Championships, just 44 points behind Michigan.

The Hoosiers then went on to take 6th at NCAAs, again despite the absence of Blaskovic. They were just four points behind 5th-place Louisville, and 61 points behind Georgia in 4th. There’s a case to be made that if Blaskovic had been in good enough health to compete at NCAAs, because of his individual and relay value, Indiana would have overtaken Georgia for 4th. Regardless, IU managed another top 10 NCAA finish, even with relays that were slightly less competitive than years past.

The return of a healthy Bruno Blaskovic is massive for Indiana’s sprint group. Blaskovic brings NCAA A-finals speed to the table in both the 50 free (18.96) and the 100 free (41.49). The 5th year will be in the hunt for Big Ten titles in both races as well.

Freshman Luke Barr is another swimmer who has great sprint free speed, but may not race the events individually at Big Tens or NCAAs. Barr is a 19.8 50, and 43.7 100 as he begins his college career.

The Hoosiers also add freshman Rafael Miroslaw from Germany. The sprint-to-middle-distance freestyler has SCM best times that convert to 42.99 in the 100 free, and 1:34.81 in the 200 free. Both would put him well within scoring range at Big Tens, and it wouldn’t take too much improvement to get down into NCAA scoring range. The interesting thing to watch with Miroslaw is whether he ends up competing in the 50 free or the 500 free come championships season. Despite the speedy 42.99 100 conversion, Miroslaw has excelled considerably more in the SCM 400 free than the 50, so it will be interesting to see if the Hoosier coaching staff tries to keep him more on the sprint or middle distance end of things.

If we go off of lifetime bests, Indiana’s distance squad is a 3-star level group. They’re led by American distance Olympian Michael Brinegar, who represents All-American speed in the 1650. He’s been as fast as 14:27.50 in the mile before, which is plenty fast enough to make the top 8 at NCAAs any given year. While Brinegar can be counted on for points in the 1650, he would need to drop a couple seconds in the 500 free to get into NCAA scoring range this season.

The Hoosiers also picked up freshman distance swimmer Jackson Carlile. Carlile enters the NCAA with a 4:22 500 free personal best, and a 15:08 1650. Neither time is near NCAA scoring range yet, but Carlile is set up nicely to make an impact at Big Tens in his freshman year. Most likely, he would need to improve somewhere around 15 seconds in the 1650 this season to earn an invite to NCAAs.

Indiana went a long way in reinforcing its distance squad with this freshmen class. In addition to Carlile, the Hoosiers add Aidan Reagan and Mason Carlton, who bring 15:22 and 15:31 1650 personal bests to the team respectively. While they’re a far cry away from NCAA scoring threats as things stand now, the pair add some quality depth to Indiana’s scoring prospects at Big Tens.

Rafael Miroslaw adds a 4:20 SCM-to-SCY conversion best in the 500. It remains to be seen whether Miroslaw will focus on the 500 or the 50 this season, but with a little improvement from his converted best, he could be an A finals threat at Big Tens in the 500.

Brendan Burns was the leading backstroker on the team last season, posting a 44.84 100 back, and a 1:39.37 200 back. He was the 200 back Big Ten Champion last year, but he didn’t end up racing the event at NCAAs. Instead, he raced the 100 back at NCAAs, where he came in 6th. He’ll be an A finals threat again this season, regardless of whether he decides to race both or just one backstroke event at NCAAs.

Sophomore Gavin Wight looks like he may have made some improvement over the summer, as he’s already swum a 48.87 100 back at Indiana’s dual with Kentucky. Wight’s best last season was 47.34. If he’s able to dip under 47 this year, Wight could be on the edge of qualifying for the A-final at Big Tens.

Freshman Luke Barr enters the NCAA with a personal best of 46.9 in the 100 back, but given his times in other events, it seems unlikely (at this point) that he’ll be racing the 100 back at championship meets.

IU has one of the best breaststroke squads in the NCAA this year. Senior Zane Backes leads this group after qualifying for the A final at both the 2019 and 2021 NCAA Championships (2020 was cancelled). Backes also took 3rd in the 200 breast at Big Tens last year. Indiana brings in one of the fastest breaststroke recruits we’ve seen in recent years with Josh Matheny. Matheny brings a stunning 1:51.38 200 breast to the table, plenty fast enough for an A finals appearance at NCAAs. Matheny also brings a 51.84 100 breast, which is just off A finals speed at NCAAs.

Fellow freshman Luke Barr is also in the mix with 52.81 and 1:56.01 breast best times, but it’s unclear at this point in Barr will compete in breast events at championship meets. If he does end up focusing on breaststroke, Barr would be a big scoring threat at Big Tens, and is currently right at NCAA qualifying speed.

Fly is another discipline where junior Brendan Burns led the Hoosiers last season. Burns was a 45.26/1:39.22 flyer last season, ultimately finishing 13th in the 100 and 7th in the 200 at NCAAs. He was the Big Ten champion in the 200 fly last year, breaking the Big Ten meet record with his swim.

This fly group is deep, as Corey Gambardella has returned for a 5th year, after qualifying for NCAAs last year. Gambardella finished 17th in the 200 fly at NCAAs last year, just one place out of scoring. He’s the defending Big Ten runner-up in the event as well.

The IM group is IU’s weakest as we enter the season. It’s led by Van Mathias, and although he finished 2nd at Big Tens in the 200 IM, his 1:43.50 is still outside NCAA scoring range. Mathias would probably have to get under 1:43 this season to have a shot at getting into the B final at NCAAs. The good news for Mathias is that the 2021 Big Ten champion — Ohio State’s Paul DeLakis (1:41.71) — has graduated, making Mathias the fastest returner from last year.

Jacob Steele also returns to the team, having swum a 1:43.95 200 IM last year. He was an A finalist at Big Tens as well last year.

The Hoosiers are back with another excellent group of divers. Leading the way is redshirt senior Andrew Capobianco, the 2x defending NCAA champion in 3m. He took 4th in 1m and 11th in platform at NCAAs last year, totaling 41 points for Indiana with his efforts. Moreover, Capobianco is coming off earning Silver at the Tokyo 2020 Olympic in 3m synchro with his partner, Michael Hixon, a former Hoosier.

Next up is Cole Vandevender, a senior who has improved bit-by-bit during his time at Indiana. Vandevender qualified for NCAAs last year after earning his first Big Tens A finals appearance. He may be more of a scoring threat at Big Tens this year, but more improvement this season could put him in scoring contention at NCAAs.

IU brings in a pair of freshmen divers, both of whom are multiple-time Junior National champions, and competed at the 2019 Junior Pan Pacs. Carson Tyler is 2x Georgia state champion, and GHSA state record holder, while Quinn Henninger is a Colorado state record holder, and a 2020 US Olympic Trials finalist. Given their backgrounds of success pre-IU, we can expect these freshmen to make an impact at Big Tens for the Hoosiers.

Indiana is in the fortunate position of returning all swimmers from their 2021 NCAAs relays, all of which scored. Moreover, the relays are actually in better shape than last year, thanks in large part to the return of Bruno Blaskovic. With 18.9 and 41.4 flat-start free times, Blaskovic is a huge asset to both 200 and both 400 relays.

Rafael Miroslaw could be a huge factor for the 800 free relay, as he enters the season with an SCM-to-SCY conversion of 1:34.81. We also need to keep our eyes on freshman Luke Barr, who brings 19.8/43.7 free times to the team. With a little improvement, he could end up beating somebody out for relay spots on the 200 and 400 free relays.

All things considered, this Indiana roster has the potential for A-finals appearances in all five relays at NCAAs.

IU is shaping up nicely for this season, as they managed to keep all of their NCAA qualifiers and Big Tens relay members on the roster for this season. Coupling that with the return of Bruno Blaskovic, who appears to be back in good health based off his early season performances, and the Hoosiers are looking better than last season. Blaskovic alone provides a huge boost to each of IU’s relays, except the 800 free. It also has to be mentioned that the Hoosiers return Andrew Capobianco, a perennial NCAA title contender in diving.

Some key additions could pay dividends as soon as this season. Josh Matheny already has NCAA scoring speed in the breaststroke events, and he has experience racing in finals of high-pressure meets. Germany’s Rafael Miroslaw could be a huge addition as well. Even if Miroslaw doesn’t get up to NCAA scoring speed individually this year, he should be a significant help to the relays, especially the 800 free.

All-in-all, this IU team is primed to compete for the Big Ten crown again, and to get back into the top 5 at NCAAs.