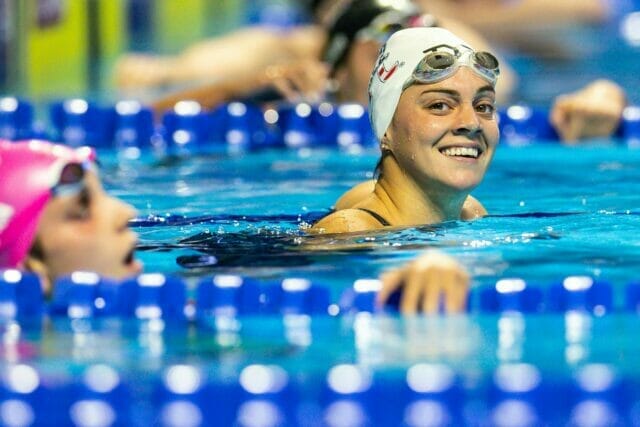 After a one-year hiatus due to the uncertainty surrounding the 2020-2021 season, our college previews back! We’ll be previewing the 2021-2022 seasons for the top 12 men’s and women’s programs from the 2021 NCAA Division I Championships – stay tuned to our College Swimming Previews channel to catch all 24.

Despite the mid-season departure of head coach Coley Stickels, the Alabama women finished out the 2020-21 season on a high note, winning the 400 freestyle relay at NCAAs and finishing fifth in the team standings for their highest showing in 38 years.

The Crimson Tide finished only place higher, fourth, at SECs, with their NCAA showcase buoyed by both a huge relay performance and some standout individual showings.

The 400 free relay was the headline coming out of the meet, as Morgan Scott, Kalia Antoniou and Flora Molnar put the team in position to challenge for the win, and then Cora Dupre threw down a blistering 46.90 anchor leg to snag the victory in a time of 3:09.78.

Alabama also finished sixth in the 200 free, 800 free and 200 medley relays, and placed ninth in the 400 medley, scoring a total of 136 points in the five team events.

Prior to qualifying for the U.S. Olympic team later in the year, junior Rhyan White put up a team-leading 48 points individually at NCAAs, finishing second in both backstroke events and fifth in the 100 fly. Other double-digit contributions came from juniors Antoniou (27), Scott (23) and Kensey McMahon (20), plus sophomore Cora Dupre (12).

Several Crimson Tide swimmers actually added time from SECs to NCAAs, and yet they still managed to produce their highest finish since 1983.

White swept her individual events at the conference championships, and Scott and Antoniou both picked up victories, yet they were still only fourth in the team standings. In fact, despite that fourth-place finish, Alabama was the top SEC school at NCAAs by a wide margin, with third-place Georgia the next-highest scoring school with 181 points to finish eighth. SEC champion Kentucky was only 11th.

All that came under the watch of Ozzie Quevedo, who stepped in as the team’s interim head coach following Stickels’ departure. This season, Quevedo returns to his role as associate head coach, as Margo Geer takes the reins in her first season as head coach.

Alabama’s sprint free group, particularly in the 100 free, is one of the best in the country, as evidenced by their NCAA victory in the 400 free relay last season.

Morgan Scott, Kalia Antoniou and Cora Dupre were all NCAA ‘A’ finalists in the 100 free, combining for 41 points, while Antoniou also placed sixth in the 50 free and Scott tied for ninth in the 200 free.

That gives the team 62 returning points in the sprint free events, not to mention that Dupre has ‘A’ final potential in the 200 free despite finishing 17th last year in 1:45-high.

Dupre was the 2020 Big Ten champion in the event during her freshman year at Indiana (transferring to Alabama after the end of the season), owning a best time from that swim in 1:43.61. Her season-best was 1:44.76 last year, and also managed to throw down a 1:43.77 split on Alabama’s NCAA 800 free relay.

Beyond that quartet, the Crimson Tide are losing Flora Molnar, who contributed on both the 200 and 400 free relays at NCAAs and was close to scoring individually in the 100 free (21st), but they’ve got reinforcements in the form of sophomore Diana Petkova.

Petkova didn’t swim on any free relays in the postseason last year, but did place 22nd in the 100 free at NCAAs and owns a very solid best time of 48.53.

They’ve also got incoming recruit Kailyn Winter, a 22.4/50.3 sprinter that could potentially fill the void on the 200 free relay along with being a top-16 SEC scorer.

Another freestyle-specializing senior that’s proven to be a big NCAA scorer is Kensey McMahon, who is coming off of a 20-point showing last season after placing sixth in the 1650 and 10th in the 500 free.

With last season’s champion Paige Madden graduating, McMahon should contend for the NCAA title this season in the 1650, and is capable of top-eight points in the 500 as well.

While the distance free events could be a major weak spot once McMahon is gone, while she’s here they’ll get 20+ points easily.

Star backstroker Rhyan White enters her senior year riding a ton of momentum after a breakout summer, placing fourth in both the 100 and 200-meter events at the Tokyo Olympic Games.

White scored the maximum 96 points at SECs last season, sweeping the backstrokes and also winning the 100 fly, and followed up with a pair of runner-up finishes in the 100 and 200 back at NCAAs (plus a fifth-place finish in the 100 fly).

The two women who won NCAA backstroke titles over White in 2021—NC State’s Katharine Berkoff and Wisconsin’s Phoebe Bacon—are back this season, and Regan Smith, the fastest woman in history in both events, enters the fold as a freshman at Stanford.

So while there is no shortage of title contenders in the women’s backstroke events, White is likely a shoo-in for a minimum of 30 points, with the possibility of more.

Another senior, Morgan Liberto, was Alabama’s second-fastest backstroker last season, picking up a fourth-place finish in the 200 back at SECs (1:52.39). She narrowly missed scoring at NCAAs, placing 19th in 1:54.13, but could be a top-16 swimmer with her best time. She’s also a solid 100 backstroker at 52.9, though that’s still about seven tenths off of NCAA scoring.

Junior Abby Koczo is on the cusp of being an NCAA qualifier after placing 10th at SECs in the 100 back last season, recording a PB of 53.06.

As long as White is on the roster, the team’s backstroke is in good shape with 30+ points coming in, and Liberto has the ability to add a few more.

The Crimson Tide had no NCAA scorers last year on breaststroke, but they’ve got several candidates to do so, with a solid freshman crop joining the likes of Petkova and Cat Wright.

Wright is coming off of setting best times as a junior (1:00.1/2:10.5), making the SEC ‘A’ final in the former, while Alabama also has rising junior Jocelyn Fisher, plus incoming freshmen Avery Wiseman, Sophia Garrison and Kasia Norman.

Of the three first-years, Wiseman figures to have the best chance at making an immediate impact, with her 1:07.8/2:26.8 long course times converting down to elite clockings of 59.3/2:08.69. While conversions are never 100 percent accurate, Wiseman should be able to be an SEC ‘A’ finalist and vie for a top-16 spot at NCAAs.

She scored 14 points with a fifth-place finish in the 100 fly at NCAAs, and as previously mentioned, won the SEC title.

Gracie Felner hit a best time of 52.33 to make the top eight at SECs last year as a freshman in the 100, and the aforementioned Liberto (1:57.5) and rising senior Ashley Voelkerding (1:57.8) were the Crimson Tide’s next-fatest 200 swimmers behind White.

Felner will vie for a second swim at NCAAs this season, with her PB from SECs only two-tenths shy of what placed 16th in the 2021 prelims. Beyond that, there aren’t too many other real scoring threats for the team on fly outside of White’s 100.

Alabama has potential medley scorers in Petkova and Felner in the 200 IM, having both clocked bests of 1:56-high to win the SEC ‘B’ and ‘C’ finals, respectively.

Petkova ended up narrowly missing earning a second swim at NCAAs in 18th (1:57.19), and went on to finish ninth in the long course event at the European Championships in May and then represented Bulgaria in the 200 IM at the Olympics.

Having delivered respective showings of 20th and 22nd in the 100 breast and 100 free at NCAAs, Petkova has an extremely strong back-half and seems destined to develop into a consistent scorer in the event.

Felner’s 1:56.8 at SECs was followed by a three-second add at NCAAs, but like Petkova, that all came in her freshman year.

McMahon was the team’s fastest 400 IMer last year, but DFS’d at NCAAs and isn’t a serious scoring threat.

The Canadian native enters her junior year looking for a third straight appearance at nationals, and is also coming off of scoring 56 SEC points as a sophomore, including earning a runner-up finish on platform.

Lucoe has the ability to place higher than 35th, but she’s the team’s lone real NCAA scoring threat and that remains a relative longshot.

The relays were a huge factor in the team’s success last season and they remain in good shape this year.

Antoniou, Scott and Dupre form a formidable trio on all three free relays, with Felner the fourth member of the 800 free and Petkova likely to fill in for Molnar on the sprints.

Petkova and Wiseman will battle to earn breaststroke duties on the medleys, and there’s no shortage of freestyle options. With White the team’s top backstroker and butterflyer by a wide margin, Felner will likely assume the fly role on the 400 medley, with Scott probably swimming the 200.

The 400 free relay remains their ace in the hole, and they’ll have a great shot at defending last season’s national title, and if Petkova and Felner are able to take a step forward, the medleys will see an improvement.

With four relays finishing sixth or better last season and the majority of the swimmers returning, Alabama’s relays remain very strong and will be crucial in pushing them up the team standings.

Much was made of the decision to name Margo Geer the team’s head coach last year, with no major head coaching experience under her belt and longtime associate Ozzie Quevedo sitting right there. Quevedo led the program to a successful NCAA showing as the interim head coach last season, and it remains to be seen what Geer can do with her hands on the wheel.

However, a lot of those questions won’t truly get answered for a few seasons. Right now, Geer is inheriting an incredibly talented group that has already proven itself.

With high-end talent that translates favorably over to the relays, Alabama should push to hold their place in the top-five at NCAAs this season.

An increased focus on saving their full taper for NCAAs could be beneficial for the Crimson Tide, seeing as though they’ve got a relatively thin recruiting class compared to their conference rivals (especially Tennessee, who finished just 39 points back at SECs in fifth), and a fairly strong performance still left them 151 points outside of a conference title.

Down the road, Geer’s ability to develop talent and execute at major meets will be tested. But this year, simply letting the top-tier swimmers continue to do their thing should yield plenty of success.