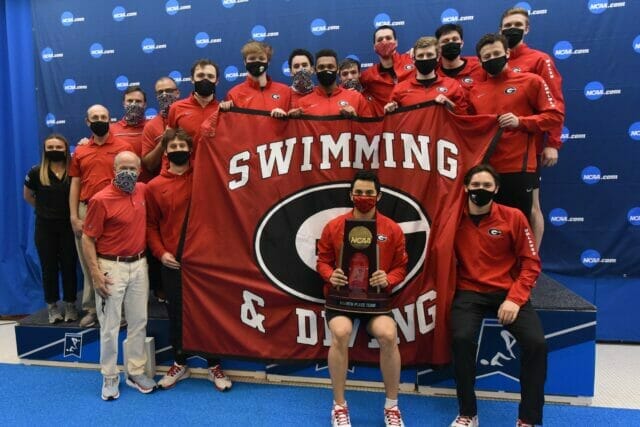 After a one-year hiatus due to the uncertainty surrounding the 2020-2021 season, our college previews are back! We’ll be previewing the 2021-2022 seasons for the top 12 men’s and women’s programs from the 2021 NCAA Division I Championships – stay tuned to our College Swimming Previews channel to catch all 24.

The 2021 season for Georgia saw a very deep team, without any single superstar, lifted by a breakout freshman season from Jake Magahey.

As the #3 recruit in the class of 2020, there were big expectations on Magahey coming into Georgia, and he lived up to those expectations – upsetting the defending NCAA Champion and the US Open Record holder Kieran Smith in the 500 free as part of a 42-point output. That made him – poetically – the third-highest scoring freshmen at the NCAA Championships, behind Cal’s Destin Lasco (49) and Texas’ Carson Foster (45).

Georgia is set up very well for the future. While they lost two of their best speed guys, Javi Acevedo and Camden Murphy, for next season, they have a well-rounded freshman class coming in, highlighted by one drop-dead stud: Matthew Sates from South Africa.

While there is a lot of speculation around the world about whether Sates should go the NCAA route after a breakout 2021, he still is saying publicly that he plans to arrive in Athens for the spring semester. As a proven short course meters performer already, Sates and his elite underwaters should make a massive initial impact in the NCAA.

In short course meters, he’s already been 1:40.65 in the 200 free, which puts him at least in the conversation for the NCAA title in that event, and is a very good butterflier and IMer as well.

For much of the last decade, the lack of sprint freestyle depth has been a weakness of the Georgia men. That story is kind of still true now. They have a solid individual sprinter in junior Dillon Downing, who was 4th in a very good NCAA Championship field in the 50 free and 16th in the 100 free. Bringing in Sates, depending on event selection, will help too, and Georgia has a good crop of incoming 100/200 guys like Mitchell Norton (43.83/1:36.11).

With swimmers like rising sophomore Luca Urlando, Sates, and a very rangey Magahey, they always have a chance at points in the free relays at NCAAs. The Bulldogs are better than most at finding key relay contributors from ‘other’ events. They put together a 200 free relay at the NCAA Championships, led off by their star Dowling, that included Javi Acevedo, Camden Murphy, and Luca Urlando: none of whom swam the 50 free individually last season.

A deep group of 200 freestylers, where Georgia is always strong, and Sates’ potential to help buoy the sprint relays, is what elevates hopes for Georgia here from a two-star to a three-star group.

Georgia, obviously, has one of the best distance freestylers in the country in Jake Magahey. Best suited for the 500 with a versatlity of speed and endurance, Magahey won that title at NCAAs and was 2nd in the 1650 free behind Bobby Finke of Florida – who went on to win Olympic gold in the 800 and 1500 free.

The men’s distance freestyles, though, will be among the deepest they’ve ever been at this year’s NCAA Championship meet, so Magahey will have to claw to repeat his 42-point output from last season. Remember that Kieran Smith was actually faster than Magahey, winning by four-tenths at SECs, and both swimmers were slower at NCAAs than they were at the conference meet.

Smith will have more pressure from the World Championship Trials in April, as a Tokyo Olympic medalist, so that works in Magahey’s favor of repeating his 500 free win.

Either way, Magahey will need help to turn this from a four star group into a five star group. And they do have the bodies and the talent to do so. Andrew Abruzzo was 22nd at NCAAs in the 500 free, and has a best time of 4:13.54 that would have scored. Rising sophomore Tommy-Lee Camblong scored a point in the mile at the 2021 NCAA Championships, and back home in France over the summer showed some improvements in speed that might get him closer to scoring in the 500 free as well. Henre Louw, a freshman from South Africa, is within range of scoring, especially in the 500 free, though his adaptation to short course swimming hasn’t been great in the team’s first few meets (he was 9:28 in the 1000 free against South Carolina on Saturday, and only swam two races).

So this is a four-star group on the back of Magahey with five-star potential if he gets some support.

This is where the loss of Acevedo really begins to hurt the Bulldogs. He came to Georgia as a sprint freestyler, evolved into a top-tier backstroker (7th at NCAAs in the 100 back and 8th in the 200 back), but leaves behind a very thin group.

Ian Grum only swims the 200 back at most big meets, and he was 10th at NCAAs last year in that event. While that doesn’t probably fill the void for the medley relays, it does give Georgia a more rounded individual scoring load. The rising junior has already been 1:44.4 this season, which is almost two seconds better than he was at this point last season.

While those guys might pick up a few individual points in March, neither will fill Acevedo’s spot on the medley relays.

Last year, Georgia had a hole in the breaststroke events too (more on that later), which meant that Acevedo had to swim breaststroke and freestyle events on medley relays. That left Luca Urlando to swim backstroke. He actually did very well – his 21.07 split on the 200 medley relay was 9th-best, and his 44.99 on the 400 medley relay was about what Acevedo would have been anyway – but now the departure of Acevedo puts even more pressure on that reshuffle. Especially with the team’s top butterflier Camden Murphy also graduating.

With 38 points from medley relays last year, that’s already a problem spot for Georgia as a top four team. Head coach Jack Bauerle will have to get creative again to even reclaim that many points this season.

This is where things get messy for the Bulldogs. With no Acevedo, who swam the breaststroke leg of the 200 medley relay, and no Jack Dalmolin, who swam on the 400 medley relay, the team has to figure out where their breaststroker will come from. Matt Sates, who has been 1:03 in the 100 breast in long course, can probably fake a short course 50 or 100 for relay purposes.

There’s some good news here though. The team picked up a late commitment from Arie Voloschin, who originally committed to Cincinnati but changed his mind after some substantial time drops. With a good breaststroke coach in Neil Versfeld on staff, development by Voloschin could save the medley relays.

But so far, it’s been Harrison Wayner who has occupied the spot for Georgia in their first two meets. They haven’t raced a 400 medley relay yet, but he’s split 24.5 in both of the team’s meets so far (Voloschin has been 25.3s).

Wayner was 14th in the 100 breaststroke at the SEC Championships last season, so he’s no slouch. But, if Georgia wants to do the things in medley relays that they need to do to stay in the top four teams in the country, they’re going to have to figure out who can develop into a 23-mid/52.0 breaststroker for them this season, because so far, nobody is there yet.

This was the most fun group to watch at Georgia last season, with freshman Luca Urlando clawing and fighting to unseat the senior incumbent Camden Murphy, but Murphy holding his ground and having the best season of his career in response.

Now, Urlando takes full control on the Bulldog butterfly throne, and he’s not likely to be challenged. He’s already been 46.4 and 1:43.3 in the 100 and 200 fly this season, which rank among the best in the country.

He’s enough to make this a three-star group, but he’s probably all the Bulldogs will get at NCAAs in the butterfly events (depending on event choice). The butterfly groups are arguably the best events nationally, based on a very fast crop of 5th years returning, so that limits the projection here.

Georgia has some capable 400 IMers, including Andrew Abruzzo, who was 15th at NCAAs last season, and rising junior Ian Grum, who was 7th.

Altogether, it’s hard to project this group, but with all variables considered, projecting about 20-30 IM points for Georgia seems about right. If there’s one thing Bauerle knows how to coach and develop with his men’s team, it’s IM’ers.

Zach Allen coming back for a bonus 5th year after qualifying for NCAAs last season, but he’s still a ways away from scoring.

The Bulldogs actually brought in a good freshman class of divers. So far, Nolan Lewis has been the highlight of that group, placing 2nd on 3-meter against South Carolina. He’s a former Junior Nationals finalist, so long-term he projects for points, but maybe not as a freshman.

Unlike many of the teams at the top of the NCAA, Georgia won’t bring back their top seniors for the bonus 5th year.

If Sates lives up to the hype, he offsets one of Georgia’s two losses, and that leaves the rest of a deep class to offset the other.

If we’re looking to the influence of the World Championship Trials, which are unusually-timed in April this year, Georgia doesn’t have quite the same level of pressure there as teams like Cal and Texas, though they do have a few swimmers – Urlando and Magahey especially – with real international dreams.

This year feels like a ‘settling’ year for Georgia. They’ve got good swimmers and will contend for NCAA event titles, but they feel a piece-or-two short, on a very young roster, of another top four finish. That’s especially true with a very experienced Louisville team breathing down their necks with a lot of high-impact 5th years returning.

The freshman class can help in some spots in relays.

Somewhere in the 7th-9th place range feels about right, given the deficiencies in relays. It just feels like NC State, Indiana, and Louisville all have better rosters than Georgia this year, even if some things (Wayner, Sates) break the Bulldogs’ way.

But the future is exciting for Georgia. They have a very good freshman class, a really young core, and if they can build through this season, they could return to the top 5 as soon as the 2023 NCAA Championships.