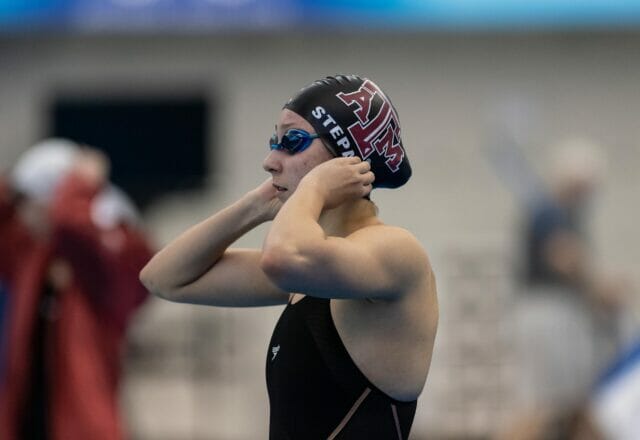 The University of Houston Cougars opened the Tanica Jamison era at home on Thursday, playing host to Jamison’s former squad, the Texas A&M Aggies. Houston has had a strong run of success recently, but both of last year’s NCAA swimming qualifiers, Mykenzie Leehy and Ioanna Sacha, have graduated, leaving Jamison to rebuild the program from the ground up.

The Cougars put up a competitive meet with the perennial SEC power, with several races coming down to the touch, but in the end the Aggies came out on top 163.5 to 130.5, with the Aggies starting to exhibition swimmers from the 100 free onwards.

The Aggies were led by Sophomore sprinter Chloe Stepanek. The Northport, NY native won the 200 free by nearly two seconds over teammate Caroline Theil, touching the wall in 1:48.65 to Theil’s 150.60. Stepanek returned later to claim the 100 free as well, finishing a whole second clear of the field in 50.18.

After finishing 4th in the 200 free and 8th in the 100 free at the 2021 NCAA Championships, Stepanek will be needed to take another step forward to lead a rebuilding Aggies squad, which lost 2021 individual NCAA scorers Charlye Campbell, Taylor Pike, Jing Quah and Camryn Toney to graduation.

Some of the most exciting races of the day came in the distance freestyle events. Abby Grottle, an A&M sophomore transfer from Pitt, had close duels with Houston freshman Mary Catherine Jurica in both the 1000 and 500 free. In the 1000, Grottle began to separate herself in the middle of the race and held off a hard-charging Jurica, 10:07.53 to 10:09.61. The two went head to head again in the 500 free, with Grottle out touching Jurica 4:55.85 to 4:56.01. Jurica, a Houston native who stayed close to home for college, closed fast in both races, out splitting Grottle by nearly a full second on the last 50 of both the 500 and 1000.

Texas A&M Isreali freshman Aviv Barzelay, fresh off competing at the Tokyo Olympics, where the Isreali qualified for the semifinals in the 200 back, also impressed in her NCAA debut, sweeping the backstroke races. In the 100 back, Barzelay won handily in 55.16, and later returned in the 200 back to win in 2:00.11.

Houston claimed victory in two events on Thursday. The first victory on the day came in the 200 breast, as Abbie Alvarez, a freshman from nearby Katy, TX touched first 2:19.48. Alvarez returned a few events later to team with sophomore Marina Ortega to help lead the Cougars to a 1-2 finish in the 200 IM, with Ortega taking the win in 2:04.38 to Alvarez’ 2:06.55.

On the boards, Aggie senior All American Aimee Wilson swept both the 1 meter and 3 meter springboard event. The Calgary, Alberta native is entering her second season competing for A&M after transferring from LSU. Thus far, the change in scenery for Wilson has worked well, as the senior scored at NCAAs for the first time last spring.

Texas A&M returns to the pool next Friday when they host in-state rival Texas in College Station, whereas Houston will travel across town next weekend to take on Rice in a two-day meet.