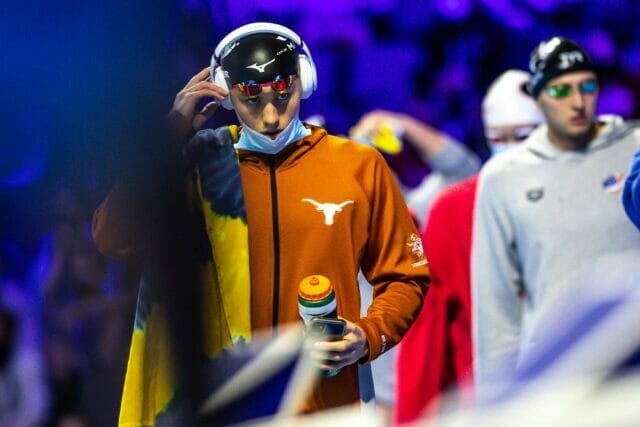 Two weeks after throwing down the normal (for that meet) fast times in their annual Orange-White intrasquad, the Texas Longhorn men got their dual meet season underway by hosting Incarnate Word.

Sophomore Carson Foster dabbled in some long course distance free events this summer after just missing an Olympic berth in the 400 IM, and tonight he made his college 1000 free debut with a 8:59.93 victory in that event. As of the moment, that’s the fastest time in the nation in this still-very-young season. According to the SWIMS database, that’s the only second time he’s ever swum that event, with his previous swim being a 10:26.79 effort back in 2014 when he was 12. Foster battled his classmate David Johnston, who is primarily a distance freestyles, nearly stroke-for-stroke throughout the race, with Johnston touching 2nd in 9:00.88. Foster and Johnston also went 1-2 in the 400 IM, with Foster winning that 3:46.15 to 3:49.33.

As evidenced by the 1000 free and the 200 free, Texas swimmers competed in a mix of their strong events and off events, which helped lead to some odd results.

Meanwhile, Peter Larson, who’s primarily a middle-distance freestyler, but has a strong backstroke resume as well, won the 100 back in 49.63, and he also won the 500 free in 4:31.12. Carson Foster was disqualified for a false start after touching in 4:23.59.

US Olympian Jordan Windle swept the 1m and 3m diving events for the Longhorns. Texas put a team under 1:20 in the 200 free relay to close out the night, with Caspar Corbeau‘s 19.66 anchor leg the fastest split in the field.

AUSTIN, Texas –  The Texas men’s Swimming and Diving team picked up where they left off the 2021 season, in winning fashion. The Longhorns hosted Incarnate Word at the Lee and Joe Jamail Texas Swimming Center and earned 13 event wins in the occasion.

Friday’s season opener featured spectacular showings across the board to give Texas its first win of the season.

Jordan Windle captured both diving events at home in dazzling fashion with a score of 449.63 points in the 1-meter and 486.3 points in the 3-meter.
The Horns won the first swim event in the 200-yard medley relay with a combined time of 1:28.88 by Nathan Quarterman, Caspar Corbeau, Zachary Van Zandt and Danny Krueger.
The 1000-yard freestyle went to Carson Foster with his time of 8:59.93.
Coby Carrozza won his first event of the day in the 200-yard freestyle (1:37.08).
Drew Kibler’s time of 1:46.69 in the 200-yard backstroke gave the senior his first individual event win of the day.
The 200-yard breaststroke was won by Jake Foster’s time of 1:58.88, almost five seconds faster than his teammate in second.
Pete Larson won both the 100-yard backstroke (49.63) and the 500-yard freestyle (4:31.12).
Freshman Tim Connery debuted with an impressive time of 48.08 seconds in the 100-yard butterfly.

The Longhorns return to action on Oct. 15 in a dual meet at Texas A&M. Start time of the meet will be announced at a later date.